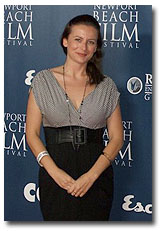 Great news! We have another festival win, The Palm Beach International Film Festival, for Best Short Film. They announced the awards on their website yesterday, and I emailed them but they have still not got back to me with details. Having been to festivals, I am guessing most of the staff went back to real jobs when the festival ended and any spare second was spent sleeping. I am sure they will get back to me in the next few days. I have had a lot of really lovely emails and tweets (you can follow our progress in Twitter here)… including my favourite from writer and director of EXAM, Stuart Hazeldine (which I helped out and got an Associate Producer credit for)… and he said…

‘will you PLEASE stop winning every film festival known to man? it's very off-putting to the rest of us. :-)’

I am sure he will be collecting lots of awards with EXAM very soon, it’s a very special feature film. More on that in die course.

In the USA, Gone Fishing AP Kerry Finlayson is repping us at the very prestigious Newport Beach Film Festival right now, which really looks great!. In fact this weekend in LA we have several fests playing all at once, including the Hollywood First Glance Festival, and Kerry is of course attending them all, if she can get between them all fast enough that is! And on Monday she jet sets off to Cannes! Madness!

We will let you know how we get on!

UPDATE! We just got a great write up on Indiewire from the fest… The Award for Best Short Film went to “Gone Fishing,” directed by Chris Jones.  Said juror Emmanuel Itier, “Gone Fishing is a tale full of humanity and love; words that are so commonly forgotten in these days and times of struggles. This is truly a film about fishing for your dreams and how the ones you love are the ones who make you shine. After watching Gone Fishing you really want to say to that special one: ‘I love you’.” Read the whole article here