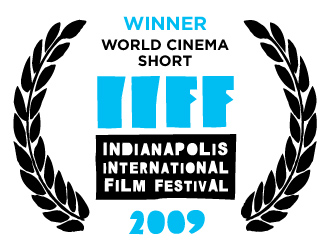 I am in the deepest darkest depths of this corporate job and slowly losing my mind, as one does during production. But a little ray of sunlight glimmered last night when I got word from the Indianapolis International Film Festival that ‘Gone Fishing’ won the Best World Cinema short award. WOW!

We have won a couple of ‘Foreign Short’ or ‘World Cinema’ awards for ‘Gone Fishing’ while playing in the USA and it’s always seemed odd to consider ‘Gone Fishing’ as a foreign film – I think of foreign films as being in a different language to the native language, coming from Eastern Europe, the Middle East or Asia. I know technically ‘Gone Fishing IS foreign – I guess it says a great deal about where I consider my cinematic home and future to lie.

Production Manager Gets Onboard
More Cash and Crewing!
The debate rages on... What value is there in Art Film?
Subtitles for Festivals
What materials do you need to enter a film festival?
Last day of the shoot… and first day of prep for the next!
There’s never enough time, money or light…