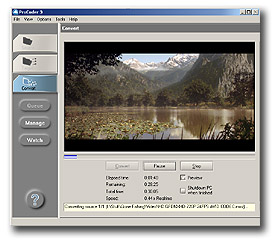 I try to be as prepared as I can, and I try to carry around with me the technology to deal with anything that is thrown at me. I have recently been tested to the max by a film festival though. They can’t handle 35mm. OK. So they want a DigiBeta NTSC or other tape. OK. Shame, but OK. Oh and they don’t want it in Anamorphic either! This is a format that I would have never expected I could be asked for. Add to that they wont screen DVD’s either and I am faced with having to create a whole new master of the film.

Thankfully I have on my portable hard drive, the movie mastered in 720P HD (with Avid Codecs) at both 24P and 25P. So I am using Canopus Pro Coder to downcovert and transcode the 24P 720P to NTSC with NO anamorphic squeeze. Crazy. I will then need to find a DV camera and use my Avid on my laptop to play it out to DV tape. Even crazier!

'The venue does not support 16:9 just yet, and we hope it will next year. It also presented problems switching between 16:9 and 4:3 aspect ratios…'

This really does echo several of the points that were included in the Gone Fishing seminar, in the new section I have just completed editing, about how festivals can ask for very odd stuff, and how you need to be prepared for anything on the road.

Hey, it's their festival so they are the boss! 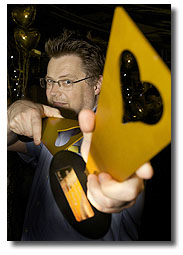 BUT… I have been thinking, having visited so many festivals, I may draw up a wish list for festival organisers. Most of what I would ask for is pretty simple, stuff like, if you are going to have a pro photographer take a shot of the winner onstage holding the trophy, then can that be available the day after for PR. So far I have NEVER been offered these pics, and when I have got them, it's only after seveeal emails (the exception being Heart Of Gold where I got to know Pancho, the photographer).

Using video blogs to share your film experience... Rhode Island from the archives
Short Films on the film festival circuit, a view from one film maker... Chasing Cotards
50 Kisses selected for the Rhode Island International Film Festival 2014
The number ONE reason I encourage filmmakers to go to film festivals
Day 1 at Incubate in Tilburg
Postcard from Guest Blogger Cathy Arton, Casting Director repping Gone Fishing at the ONFilm Festival, Virginia!
Great Write Up on IndieFest.com!