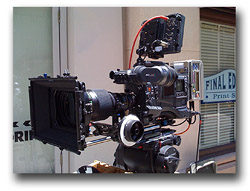 Great news! We just found out that we won both Best Short Film and Best Actor (for Bill Paterson) and the Staten Island, New York Film Festival. That, along with the PGA Award from last Sunday night, takes us past 30 international awards. Wow!

So I promised I would do a round up of the HD cameras that were tested and the results premiered at the PGA conference. So here’s how it was done. Eight of the top cameras, and one 35mm film camera, shot a number of scenes that were fundamentally the same. They were setup, lit and operated by top Hollywood camera teams and the technical levels were world class. The presentation in the theatre (a mix of 2k projected clips and powerpoint) was nearly two hours, and at times a little techy. Of course it was all geared toward large budget productions and so I will refocus their findings for lower budget indie films.

The tests were a series of interior and exterior shots, with actors of different ethnicity, different hair colours, wearing different coloured clothes and doing a mix of activities, all filmed in different lighting setups (ranging from harsh daylight to a single tungsten bulb). The shots were all taken through post and mastered at 2K, the format in which the shots were also presented.

To the untrained eye, all the cameras would look like film, that is for sure.

To my eye, by no means a DP’s eye, but certainly someone who undertstands the basics, I was impressed at how good all these cameras looked in all the different lighting conditions.

However, there were some weaker cameras – the Panasonic AJ-HPX3700 (Vericam) displayed video like effects on one shot (which included high contrast pyros), and the Red One camera did look ‘mushier’ and more processed than the other cameras on the whole (sometimes loosing considerable detail). To my eye, both the Panasonic and Red were the weakest cameras, followed by the Viper and Genesis (which are older cameras too).

The Sony cameras came out well and at the top of the pile for me was the Arri D21.

I guess though, all eyes from the indie community are on RED ONE – Is it good enough for a low budget feature? From what I saw, heck yes! Compared to anything that was cost effective just three years ago, it's mind blowing. So let's put it another way. It's at the bottom of the pile, but that pile is the top tools available, and as such, ideal for cash strapped film makers. Would I buy one? No. Would I rent one? No, I would rent a better camera and work hard to get the same or better deal. Would I use it if it came to it? Absolutely.

Apparently there is going to be an article in The American Cinematographer magazine soon, so I am sure it will all be there in incredible detail.

Also interesting were some observations they made during the shooting. Here is are a few of those comments…

1. One of the camera teams lost a shot due to operator error – it was accidentally deleted, which serves to highlight just how essential data management on a digital (non tape) format can be. This also happened on two other productions I know of in the UK. So it’s a REAL problem and you must take care. When you move data from the camera to a backup system, you MUST have someone qualified to check that it actually has copied as expected and is secure.

2. One DP commented at how long it took to setup the cameras and get everything right. Especially when compared to film, where he was ready to shoot in just a few minutes after whipping out his light meter and assessing the situation. Part of this problem is due to experience with the new formats and cameras for sure, but digital can certainly be more ‘fiddly’.

3. Digital setups generally needed a ‘tent’ for all the kit. This would be an added burden for a low budget film (though you may just wing it of course).

4. The Arri D21 has an optical eye piece (the others having electronic eyepieces) which meant that setup and line up could begin before the camera was even powered on. There were some comments that this could save time on set.

5. There was a great deal of conversation about embedding ‘metadata’ into the files so that along with the pictures, the camera would also record things like GPS position, F-Stop, type of lens, circle takes, even continuity notes etc. This seems like a great idea and will probably happen soon.

6. Using inexperienced crew could be catastrophic, and every camera had different crews working in different ways. This made switching from one camera to another a problem.

7. It appeared that you could mix formats, shooting film and HD and different cameras. Of course, you MUST make sure post will work for this.

9. Shooting camera tests is also essential, though for low budget films this may not be practical.

I am sure there were many more great points that I missed too!

For me I was left with 2 thoughts though.

Fundamentally, YES, I would be happy to shoot any of these formats, though if it were the Panasonic or Red, I would work very hard to try and shoot one of the other formats first. I would always seek the Arri D21 first. If Red were the only choice, that would probaly be OK in many circumstances. The Panasonic did look too electronic at times though and I would try to avoid.

BUT… I would also still consider film, especially if the numbers worked. Of course some projects would be suited to digital formats, anything effects heavy for instance, but for many projects, film still seems to be a viable choice, at least in early 2009.

UPDATE FROM BRENDAN DEERE – Re: HD Cameras vs film – it is always easy to work out which is shot on what – HD cameras always blow out highlights but retain a lot more detail in the dark/shadow areas of the image – WHY – it is because film is a negative image while video is a positive image (if you see what I mean). Brendan

UPDATE FROM HUGH MACDONALD – As a VFX person who has worked with film, Red, D21 and SI2k footage (plus have worked along side people who have worked on Genesis footage), I've noticed the following things with Red vs D21:
The D21 has per-pixel noise, whereas the Red has has a double layer of softer noise (smaller monochromatic noise, with larger and softer red/ blue noise on top). The Red's noise seems more like film's than the D21's.
The Red does give softer images to start with, but this feels like it's because it hasn't had any artificial sharpening done to it. The D21 footage felt artificially crisp, and the Red footage could easily be made to have the same feel to it (but it is essential to do this kind of thing AFTER the VFX has been done and not before/in-camera)
The D21 has some nasty issues with very small highlights. A 1-pixel highlight will take on a saturated colour, de
pending on where on the chip it falls. As it moves, it will strobe between a few colours. This
isn't good. I've not see the same thing on the Red, but I've not seen it not happening too… So I can't really speak for that one.
From a VFX point of view, on the films I've done in the past year, I'd actually prefer to receive Red footage (as long as it's been treated properly in post) over and above D21 footage.
That said, as you mentioned at the start, they're all pretty close together, and they're all very very good at what they do.

Thanks Brendan and Hugh.

Independent Filmmakers Rough Guide to Aperture, F-stops and Shutter Speed
The Final Cinema Version of 50 Kisses Is AMAZING!
Everything you need to make a feature film for cinema release
Avoid the fetish of 'kit' and allow your creativity to flourish
PGA Conference Day 2
Leaving LaLa Land… for now…

One Response to PGA Conference, The Digital Camera Roundup…