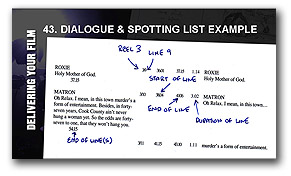 Wow. What a day. Last week I worked relentlessly to prepare the Delivering Your Film To The Sales Agent workshop. It was based on a ‘sales schedule’ I had been handed on a real ‘low budget’ feature film I had been consulting on only six weeks ago, so it was very fresh in my mind. The workshop was essentially a deconstruction of this list, and it took all week to get it into place, and even had me working through Saturday night to be ready for the twenty odd strong group on Sunday morning. But I am glad I did because the reaction was nothing short of extraordinary.

Stand out moments included David Wilkinson, distributor from Guerilla Films, coming to talk to the group about the realities of UK distribution. I remember looking round at the group who were all listening so intently to his experience and wisdom and noting how engaged they were – this was echoed later by one delegate who said it was one of the most important conversations she had ever listened to. It literally transformed her view of distribution.

During the workshop, it became very clear that the major cost for any indie film is carrying the cost of making 35mm prints. We all know so many films are being shot digitally now, but what people forget is that 35mm is still the dominant distribution format. Sure, we may have some digital theatres here in the UK and we can capitalise on that, but around the world, 35mm still rules. Who, for instance, is going to swap out thousands of old 35mm projectors in Indian cinemas and replace them with high tech super expensive digital projectors? Some of those 35mm projectors will be over 50 years old and still going strong. They will be going sting in fifty years too. What is the compelling reason for those exhibitors to swap out the old for new?

We must remember that our films are made for a global marketplace, and today, I can go into any cinema in the world with a 35mm print and be reasonably sure I can project it. Not so with any digital formats.

And so, the larger sales agents ALL still require your film on 35mm with all the bells and whistles. And you want to be working with those reputable guys and NOT the fly by night operators so many low budget film makers get stuck with.

Of course this all assumes you WILL get a 35mm release for your film – certainly most of us want that, but is it realistic? TV, DVD and internet distribution are far more viable, and in that case, we could drop the very costly 35mm elements. This was perhaps one of the pivotal conversations of the day.

This is just the tip of the iceberg and the day was really an exploration of ‘what level’ one should pitch your film in order to NOT spend too much money on deliverable’s (the full list came in at around £70,000, and that’s with you doing a lot of the work yourself and unpaid)

The group left exhilarated and exhausted, and I am sure several of them with fried brains. I asked for some feedback, and here’s some of what we got…

The business side of the industry is often a huge question mark for me. This course really helped me understand some of the messy bits – let’s have more…
Mazin, Film Maker

The course you MUST take before starting to produce your next movie
Stuart F;letcher, Film Maker, London

Answered all the questions I didn’t know existed!
Thereza, Producer from London

Hugely resourceful. It has made me highly aware of the administration requited to see the movie into distribution
Writer and Producer, London

You have taken the fear out of the scary legal stuff
Diana, Film Maker from Devon

I am delighted at the feedback as I was concerned during the day about our delegates as let’s face it, deconstructing a sales contract may be needed, but it’s hardly a barrel of laughs! But it seems we managed to keep things on the entertaining side at the same time as getting the message over. In fact I am so pleased, I think I am going to expand this into a 2 day course, the first day covering the deal making aspect of film sales – how do you do a deal with a sales agent on day one (working through the contract) and on the second day, this course on working on delivering your film to the agent.

Onwards and upwards (and actually horizontal as I need to get to bed!)