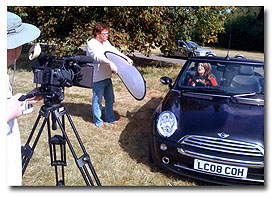 After a week of shooting, we have wrapped the UK end of our large scale corporate job and sent a camera team off to the USA for another week of filming. It’s been a tough shoot so far as there have been so many locations and actors. In fact, more locations and actors than your average feature film! And it’s only ten minutes long! So I can relax a little this weekend, but not too much as I am working on the final visual effects and grading next week, ready for final cut, online and delivery by the weekend.

After some feedback I received last night, I have also decided I am going to make a short introduction film for my ‘Gone Fishing’ online workshop – at the end of the workshop we ask delegates for feedback, and also for comments about how we could improve the workshop. Consistently people have said (to paraphrase), ‘I was unsure about signing up, and if you had a short video that covered the content, I would have signed up right away… I am delighted I did sign up, hence I have given the workshop a five star review.’ So that video shoot is now on my agenda for the next few weeks.

Specificaly, it was the feedback that we got last night that tipped the balance and precipitated the choice to shoot this video… And here it is in it’s entirety…

How would you rate the seminar overall?
5 Stars

Can you provide us with a one line comment or summary – this will appear at the top of your review.
Truly Exceptional… Don't Skip This!!!

Can you give us a review? This will be featured on our home page
This master class opens up so many options for you to go ahead of the obstructions and making your dream come true. The approach and material is excellent. Most feature films have their making which kinda motivates the viewers but this was truly exceptional, From pre-production to post and then festivals and marketing and so much in detail. No film school gives that much information about grading, music, 35 mm, costume design, press pack….THE SECOND UNIT for a short film was unexpected…WOW… I am short of words. Chris you really fired me up. YOU SIMPLY ROCK!!!!! Thank you soooo much for making this…

How would you describe yourself… eg James, Film Maker, London
Film Maker

How could we improve the seminar and your experience?
I think giving a 1 min preview of the seminar would help a lot of film makers or learners to join the seminar without a second thought. I too wasn't sure about it but I have read your Guerilla Film Makers Book which kinda boosted me up 2 years back and brought me on the track again….so my instincts wanted me to join this and it has really fired me up again…. Thank you chris.. thank you…

Blimey! Thanks so much to you too.

Now I have to plan that ten minute video – ten minutes or shorter so that we can get I up on YouTube too.

What’s the one thing missing from your financing arsenal?
After years working in the real world finding my life rushing past me faster and faster, i...
Day Of The Flowers: Ten Tips for shooting in the heat and humidity abroad
A Masterclass In Microbudget Film Making - Interview with 'Paranormal Activity' writer and...
And the award goes to… the film maker who is not present!
'Gone Fishing' wins another festival… that's thirty something by my counting!