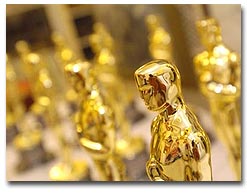 Yesterday, I got an email from an Australian film maker who is now in the running for the Oscars, just as I was this year with Gone Fishing. As I have had a numbe5r of querries this week regarging the Oscars, I thought I would share his thougts and my response. Here’s his email…

My name is Ben Phelps, a Writer/Director from Sydney, Australia… I recently took part in your online workshop for Gone Fishing. It was inspirational and exciting to hear about your adventures during the Oscar shortlisting.  I've recently gone back to re-watch the Oscar video because… we had some great news last week. Our short film, Nice Shootin’ Cowboy, won the Narrative Short Jury Award at Austin Film Festival, USA.  Just like Gone Fishing, we’re now eligible for an Oscar nomination with another 80 films from around the world.  Given that we have to wait until the next deadline on 1 Oct 2010, it will be an anxious wait!

If you have any advice or further insights (from your own experience or from your informative contact, ‘Deep Throat’, at the Academy) please let us know!

Hi Ben – as you have done the online workshop, I think you will know most of what I know, regarding the process of getting on the long list, then going to the short list, and hopefully to final nominations. I would recommend you consider setting up a commercial screening in LA through Laemmle theatres (I wrote about this on the blog last year). The main reason is that if your film appears on TV or on DVD between now and the Oscars 2011, it might disqualify you from the awards – the win at Austin, as my understanding has it, does NOT protect you from this possibility, but screening commercially for three days in LA will (note – please check Academy rules as they may change from year to year). I know of one film maker whose film was short-listed and the sales agent screened his film on late night TV without his knowing. Someone grassed them up and his Oscar ambitions vaporised. You do not want to have to drown those sorrows!

Also, I would use your time between now and the ‘long list screenings’ (which will be around November 2010) to write a killer script, then head out to LA around the time of these screenings, and start seeing agents and managers and tell them ‘hey my film is long listed for an Oscar… we find out about the shortlist and then the nominations in the next few weeks…’ That alone should get you some traction in meetings. You would be amazed at how few film makers actually use this amazing ‘heat’. This gives you an edge.

Of course you need the killer script too – but then you do have a year from now to get that baby cookin’.

Remember in Hollywood, it’s not how ‘good’ you are, it’s how ‘hot’ you are, and how ‘talented’ you are perceived to be. Work on getting a powerful advocate between now and then so that they can introduce you to Hollywood as being both talented and hot. It may be an agent, a manager, a lawyer, a director, a connected festival judge, a writer, an exec… As long as they are perceived as being powerful and connected, their advocacy will work wonders. Good luck and see you at the Oscars! 😉

And I just got this response…

Thank you for such a detailed reply.  I honestly didn't expect an answer so I really appreciate it.  From one passionate filmmaker to another, it means a lot.  I'll keep you posted as our Oscar journey unfolds.  We have two feature scripts ready to go so we'll do our best to take advantage of the 'heat' generated by the win at Austin. FYI, see this link. Ted Hope is incredibly inspiring and a true film futurist:

Fingers crossed for Ben and his team then. If you want to see more of his work, you can check out his site here.

If yu want to see all my posts on the Oscars, click here (remember they are in reverse order as they are form the blog).