By Chris Jones on February 6, 2011 in Inspiration, Something for the weekend? 10

When I was a kid, I loved movies. But it never really occurred to me that film making was a viable career… that was until I saw this documentary. For me it changed everything.

Of course this is the days before the internet, before DVD extras, before even the most basic ‘making of’ documentaries. Back then, movies were made by wizards and magicians who lived out in Hollywood. On a deep-gut-level, I knew that I wanted to make films, but I had no camera and no way to even begin. There weren’t even any books back then.

It was at this time I saw this documentary. And within the single hour of this show, everything clicked into place. I got it.

You see, as a kid I had been fascinated by magic and magicians, about the idea that I could create the illusion of the impossible though trickery. And that is what movies did too, they were the grandest of magic tricks. This Horizon documentary deconstructed those amazing illusions, examining the shots and sequences from my favourite movies.

Within weeks I had begun making my first movies, shooting on a blagged Super 8mm  camera, using floodlights from the hardware shop and convincing friends to dress up in elaborate makeup as zombies.

Looking back now, I am amazed at how ambitious I was. I even created a matte painting with rear projected live action elements (along with some shockingly effective prosthetic effects). And to seal thee whole illusion, I discovered the huge importance of sound, music and atmospheres.

Watching this Horizon documentary is like going back to my old film school. Back then, I must have watched it fifty times, over and over, wearing out my long lost VHS tape.

So thank you YouTube, for reconnecting me with a very important step in my career.

Blimey! I hope you enjoy it as much as I did, especially the fact that the film makers had clearly never seen Star Wars and assumed the audience hadn’t either! Darth Varder huh?

NOTE – At the end of part 1 and start of part 2 you will see that even back then SLR cameras were being used in film making! Thirty years ago ILM was using Nikon SLRs! Now it’s 5Ds!

UPDATE! I have just been Tweeted an image that says it all really. Thanks @mazin_power 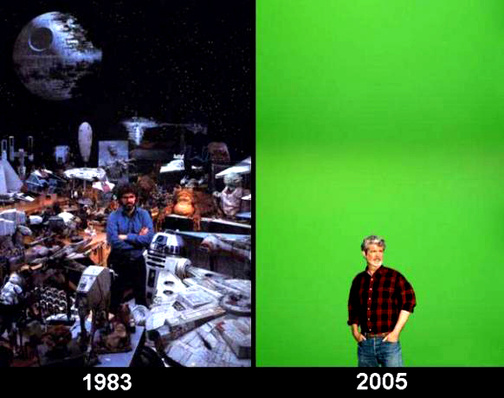 How Filmmakers Consistently Climb Mount Impossible... Four strategies to get you on set
Get a ton of filmmaking tips, tricks and articles every day
Ted Hope and Ed Burns discuss the value of failure in the creative journey
Design your destiny by managing and creating your beliefs
Top Ten Quotes for creatives by Steve Jobs
Space Oddity: It's cool on SO many levels!
Interview with the writer of last years winner of the Reed Short Film Competition – Read The Script, Watch The Film, Meet The Film Makers
Success is more perspiration than inspiration, but sometimes it’s the inspiration that fuels the perspiration… A masterclass in being a writer (and creative person).