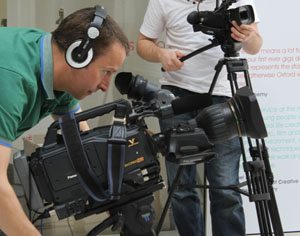 I’d heard about the Sci-Fi London 48 Hours Film festival, but to be honest, I hadn’t ever considered actually doing it. I was more interested in getting my own feature film projects off the ground. However, as many of us know, making films (where everyone gets paid) takes time and I passionately wanted to make something and thought this would be a fantastic opportunity to do that.

From the outset the film had to be something I could use to show my directing strengths and to promote my forthcoming sci-fi feature film, Kaleidoscope Man. I also decided to go for traditional, good old fashion story telling, rather than something trendy and arty.  I wanted to make a touching story, about hope, and it had to look cinematic. So I found some epic locations in Coventry and went for two classic Shakespearean actors; Michael Bott and David Claridge.

I came up with a simple outline; a man prepared to sacrifice his own daughter for the progression of mankind, who then discovers that a choice like that comes with a huge price – a simple yet powerful theme.

Getting the shoot together was a challenge, the locations were fine, and I needed to spend £100 on public liability insurance as well as a £50 donation to the Herbert Art Gallery, who lent us their underground location and housed us for the day – money well spent.

I eventually found my cast about 20 hours before the cameras rolled, which was stressful. As I was shooting in the Midlands, I went to two agencies in Birmingham who were very helpful (I was nervous about approaching them initially as I thought they would charge me – I should have just gone for it!) I also enlisted the help of local producer and all round superhero, Richard Wood, who brought in camera assistant/2nd Unit & stills hero, Paul Horton and make up girl, Natalie Nailor. I’d also made the decision that I would DOP the film myself on my own camera.

Our title was; ‘A Swift Change’

Our line of dialogue was: “We fitted one in his skull and it transmits it to here. Coded just to my card.”

Prop was: A photo frame: We see a character take a photo frame, open it, take out the photo and replace it with a new one, reassembling it and putting it back into original position.

Adding these elements were tough. It was a bit like having the cast and locations shifted just before you’re about to shoot. But we worked it through. The title was fine (it was about a sort of child swap anyway). Michael Bott, the villain in the film, came up with the idea of how to make the dialogue work and we added a simple look which beautifully linked up to the next scene. Sonia Wilson and Angie Cox came up with how to make the photo frame work. It meant a major re-think of the story, and now its a integral part of the story. 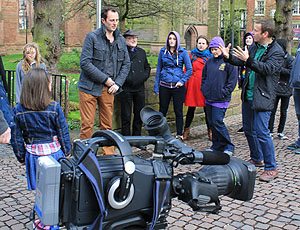 The shoot went well, and we stuck to a tight schedule. The only part I found hard was the crowd scene at the start, mainly due to the small amount of extras that turned up. Luckily, Richard Wood went out and drafted in some local skater kids who saved the day. I used radio mics on the actors and a portable audio recorder for atmospheres etc.

We wrapped at 9pm, then went back and digitized the footage. I got up at 4.30am (I’m a bit of an insomniac anyway) and had a rough assembly by about 10.30am.

I nipped and tucked for the next 5 hours and the film started to take shape. Then we shot some insets, the ink in the fish tank, CU’s of the picture frame being opened and the spaceship they see at the end.

Ahhh, the spaceship! I’m not a CGI expert, so I shot a white disk which we attached to a drill against blue screen. I cut it in and it keyed excellently, but it suddenly went from a classy little film to Plan 9 From Outer Space. It was 10pm. I was tired, I hadn’t even put the music, titles or end roller in yet and the film was still eight minutes long. It seemed like a mountain of work and the film was looking… well… just terrible! Sonia Wilson and my wife, Angie, had a look at the edit, their faces said it all. What the hell were we going to do about the spaceship??

I took half an hour out to relax and get away from it and to contemplate my future.

At the moment, I am being mentored by a top UK film Producer. And I though, could I show this to her? No, definitely not! I decided to make it work, or don’t enter the competition. But I’d worked so hard and I AM NOT a quitter!

So I spent the next 7 hours hacking it to bits. I got rid of the spaceship and shot a black piece of card with pin pricks in for the stars. Then I added a basic lens flare for the spaceship. It was simple, but seemed to work. I put in the titles and mixed down the sound. Finally, I added the music which I had downloaded from Audio Networks. And suddenly; halleluiah – it was working!

I went to bed for about an hour. When I woke up I felt awful, but pushed through and nipped and tucked the film to length and finally uploaded it by 12.55pm. 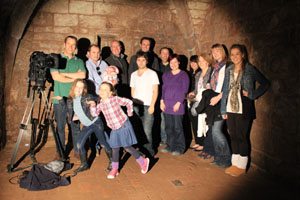 On reflection, the thing I missed was a chance to just watch the film with a fresh pair of eyes and think about it. A week has passed now and I’m still wondering; did I use the best take there? And, maybe I should have put that close up in. Oh well! Generally though, I really enjoyed the experience. It was fun, a great inspiring collaboration, and I’m happy with the final film – oh, and my mentor loved it!!

So, let’s see if it has legs and helps me inch towards getting Kaleidoscope Man up and running.