Final guest blog about SciFi London 48 Hour challenge films, this time from pal Tom Worth… take it away Tom… 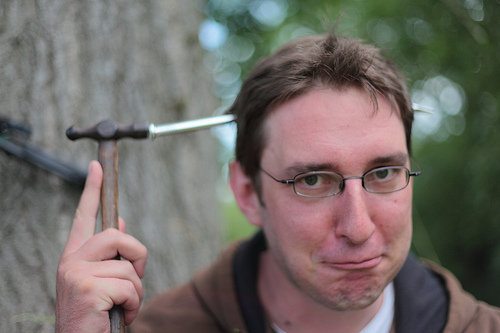 I love 48 hour film challenges. I’m not sure why though: they’re exhausting, stressful and at the end you have a film you wish you’d had time to polish a bit better. However, there’s something about the experience that is incredibly satisfying. I’ve done three now. One was years ago and was in fact the first film I made. It was me and three friends with some blagged kit and no idea what we were doing. Our film was rubbish but we had a blast and learnt a lot. (Thankfully this was before YouTube so none of you have to sit through it…!)

The last two years I’ve been Producer on a much more experienced team entering the Sci-Fi London 48 Hour Film Challenge. So I thought I’d give a bit of an insight to what I’ve learnt from both our successes and our failures. We were shortlisted last year and have made the final 20 this year so we must be doing something right.

Last year was a bit of a reunion. The previous year we’d made this little short film called Sign Language that went on to completely unexpected success picking up various awards including the Grand Prize at Virgin Media Shorts. So we decided to get the band back together and use some of the money we’d won to make a 48 hour film. It was the weekend of Oscar, the Director’s birthday so it seemed like a good way to celebrate.

Our plan was to be ambitious and stand out. We were in it to win it. We decided beforehand to try to make a Victorian Sci-Fi; found an amazing location and hired a few potential props, lights and even a generator just in case. We also had access to a very cool VW camper van called Joni owned by one of our actors and our 1st AD’s partner was pregnant with twins and said we could use her belly… So quite a mix of ingredients before we’d pulled anything out of the hat. The film ended up costing nearly three times more than Sign Language which seems ridiculous in hindsight.

Our 2011 entry – Silent Girl – looked amazing for what we achieved in the time, but falls down by not making any sense. Some people may have given us credit thinking we were being really clever and they just didn’t get it… But no, we just made a film that made no sense, sorry. Watch below.

This year, however we were much more relaxed. So relaxed in fact that I only really started to plan three days before the event. We had no locations, no props and just a few lights, but a really great crew. In many ways this was much more freeing as having done it the year before, we had more of an idea of what could be achieved. We also approached it more from the point of view of having fun with our film-making friends rather than trying to make a film that would win. The film we made is pretty silly but we had a lot of fun making it and that was what we wanted at the start. Also it actually makes sense this time (just).

So what have I learnt from these past two years?

Take your time. This may seem counter intuitive but don’t rush to shoot something until you’re ready.

Both films we’ve done we’ve not been able to shoot till the Sunday morning and I think this helped. On Silent Girl we did shoot the camper van stuff on Saturday night and actually that’s the main reason the film makes no sense. I was so desperate to get something shot that we filmed that before the script was completely ready. We changed the story slightly after shooting that night and that’s the reason the film doesn’t quite work.

Similarly you should take time in the edit to work the film until you’re happy. Don’t just settle for a halfway decent edit as soon as you have one because you’re worried about time for sound design, etc.

Write a script. Filmmaking is so much easier when everyone has a script and you all know what you’re doing. Actors can learn their lines, your DOP knows what he’s shooting, Art Dept know what they need to source/make, etc. You can also shoot out of order and know you are still getting everything you need. Get a writer on board who can write a good script once you’ve agreed on a story structure you’re all happy with. They can be doing this while the rest of the crew sources props, makes costume, recces locations and starts VFX. 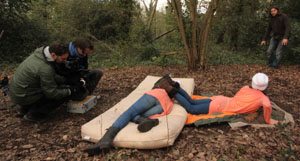 Get a good size crew. One Writer/Director/DOP/Editor will struggle to do all those jobs. Better to have more people concentrating on their own little bit. I’d say the crew you should aim for is: Director, Producer, Writer, DOP, Focus Puller, Sound Recordist, Art Dept, Costume, Makeup, 1st AD, Editor, VFX, Sound Design, Composer, Grader. Plus get some runners and drivers to help out if you can. Sounds a lot but really only your Producer and Director and maybe your VFX team will have to do the whole 48 hours. The rest you can stagger to when they are needed to keep your crew fresh.

Blag whatever you can get your hands on. Locations, props, kit, people, cars, vans, whatever you think might be useful see if you can have access to it before you start. You never know what you might need and better to have it and not need it than need it and not have it.

Trust your crew. It’s amazing what talented people can achieve. The 48 hour Challenge is a chance for your whole crew to prove what they can do so let them go for it. Last year our Costume Dept made the maid’s costume from scratch through the night. This year our Art Dept made blinking darts, sprayed guns and all sorts of other weirdness. 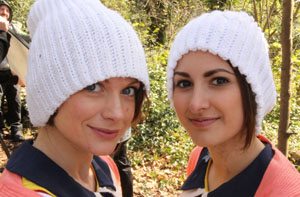 Have some actors on standby. Trying to cast a film you’ve not written is tough.

Last year we had a couple of actors in place but had to scramble to fill the other roles on the Saturday. In the end we were lucky to have some awesome talent come on board at the last minute. This year we asked friends who are actors if they were available if we needed them which gave us a bit more flexibility with casting.

Leave time for grade and sound design. This year we gave our grader and sound designer about an hour to do their thing. What they did was amazing but if we’d have given them maybe two hours or more then our film could have looked and sounded near perfect.

Edit as you go. If you can start getting rushes to your editor as you shoot, they can then be transcoding, synching and maybe even starting to cut scenes while you’re still shooting. Each year we’ve finished wrapping at about 5 or 6 on Sunday but it’s been ok as we’ve always started the edit process by then. If you wrap at 6 on Sunday and you have to then transcode and synch all your footage, you’re going to struggle.

Check your credits very carefully. It’s easy to make mistakes when you’ve been awake for 50 hours straight. Get someone to check them carefully. I made a ton of mistakes in our credits last year including getting one of the character’s names wrong and misspelling many of the crew’s names.

Set deadlines. As producer you need to set deadlines for when you think you need each stage done. Set two deadlines. One when you want it done, this is the one you tell your crew, and one when you need it done. Keep this to yourself and don’t panic until you’re near it (I hope none of my crew are reading this).

Don’t panic. Especially don’t panic when reading Twitter on Saturday night that lots of people have wrapped before you even have a script. They will either have made a story they already had in place (cheating if you ask me) or their story will be crap. Stick to your guns and make sure you’ve nailed your story before shooting. The only time you need to panic is when you leave to hand in with 35 mins before the deadline and TFL says the journey will take 34 mins. Then you can panic but only then.

Have fun. What’s the point of putting yourself through a weekend of no sleep if you’re not going to enjoy it. We had a blast for much of this year (and last year too) and that’s what makes everyone want to come back and do it again.

And just to finish here’s a shot of our lead actor Al leaping over a log and stacking it into a tree. Unfortunately we weren’t recording sound. It’s still pretty funny though.

Good luck everyone and see you on Sunday.

Thanks Tom, and good luck!

So we got another email from Oscars.org…
Entering competitions and funding processes - top nine tips from the real world
Near Kisses for 50 Kisses
How to create a short, emotive, engaging, emailable and unique killer pitch for your movie
And the winner is… report from the SciFi London 48 Hour Film Challenge Awards by guest blogger Tom Worth