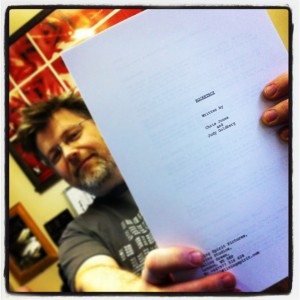 We recently completed the new draft of Rocketboy, by far the biggest reworking of the script ever undertaken. We sent the script to a handful of trusted people for feedback and we are still waiting from a few to come back.

Waiting for feedback and getting feedback can be a nerve wracking experience, so I thought I would share some of my thoughts about the process.

1. You want your script to be the best it can be
That’s why we ask for feedback. We don’t ask for it to make us feel better about our work. Of course it’s nice when people do like it, but that’s not the point. It’s easy to fall into the trap of taking it personally when you get negative feedback. Don’t, and don’t let feedback stop you from advancing. And don’t reject all bad feedback in the spirit of… ‘but they don’t understand my brilliant work…’

2. People will criticize more than they will praise
If you ask someone for feedback, they will tell you what they think, and mostly it will about what’s not working. If you are lucky they may pepper the negatives with a few positives. But expect a barrage of negative criticism. This is just how human beings are and it’s an important part of the process. And remember, you did ask for it.

3. People will read quickly
They may even scan the script, missing slug lines, skipping scene descriptions and jumping right to the dialogue. Many people won’t admit they read this way, but screenplays are blueprints and not works of great literature, so they rarely make a cracking read like a novel can. It’s just the way that it is. Slug lines are the one thing people skip most, so you might want to add a tiny description of the location at the head of each scene. Next is skimming the description as it takes too long to read. Keep scene descriptions broken up into sections of no more than four lines so it’s easier to read. Make sure names are all different sounding so as to avoid confusion during a speed read.

4. Listen carefully for technical story problems
Many problems are simple to fix, a misunderstanding over timescales, the nature of relationships between characters, the age and even sex of characters for instance. These are technical problems that need addressing, but are also simple to correct.

5. Listen carefully for confusion
When several readers tell you something does not make sense, you need to think about addressing that problem. If it makes sense in your head, if you can explain it so it makes sense, then the problem is in the writing and again, easy to fix with either a trim, or the addition of a key line or few words. It’s impossible to read it wrong, only write it wrong.

6. Get as much feedback as you can
If there is one thing I have learned, it’s that you can’t have too many opinions. You can of course disregard every single one, but every new voice will give you the chance to see you work from a new angle, and more often than not, either directly suggest new ideas to you, or trigger new ideas from yourself.

7. People have taste and individual likes / dislikes
Some people will focus on and celebrate certain areas of the script, where others won’t even notice those parts. We all have taste and gravitate toward story threads that resonate strongly with us as readers. If you get to know your reader, you will also get to know their tastes which will help make better sense of their unique feedback.

8. Make it easy to receive feedback
Accommodate the reader by allowing them to deliver feedback the way they want to. Some will offer extended notes, others a bullet pointed email and some will want to chat – in which case try and say as little as possible so they can brain dump their thoughts. You will have plenty of time to discuss and ask questions later. Above all, do not disagree. This is not about right or wrong. Their opinion is 100% true and authentic to them. You cannot deny that. Listen and then question. And get this feedback as quickly after the read as you can, so it’s fresh in their mind.

9. You may well get confused
I can’t tell you how often I have had conflicting feedback. I personally believe that most people have little experience of reading scripts. I have a handful of people whose opinion I will drop everything to hear. Having said that, if you are getting lots of confusing opinions, it’s likely there is a problem with your screenplay that needs addressing. Listen and take it ALL onboard.

10. Not all ideas are the right ones
When you ask for feedback, alongside criticism, you will also get lots of new ideas suggested. Of course, it’s easy for people to make sweeping suggestions, they don’t need to spend six weeks implementing them! Nor have they often thought them all the way through. Their ideas may be great, but just not right for your story. Take the ideas that resonate, don’t be afraid to reject, but also, don’t be afraid of the right idea that means a huge rewrite. Again, it’s a process.

No-one can make it better… except you. Only you can sift through the feedback and make choices. Don’t allow feedback to stop you moving forward. Writing is all about rewriting, refining, improving, even if it does mean going back to the drawing board. It’s a process.

Ultimately, your screenplay is like your child. Everyone will offer advice, but it’s you that needs to take considered, level headed action.

'Rocketboy' relaunches with a tonal shift that makes ALL the difference
Why telling YOUR story is an essential act of creation - both for you and the world
10 Mistakes People Make Writing and Working In Television
Why producers WILL NOT READ YOUR SCRIPT - shocking case study from one exec
Create a 'moment' in your story or film to get people talking
Lost the plot? Why taking notes is essential for screenwriters
How to produce your movie: Ted Hope and Christine Vachon at AmericanIndependentsDay.com
The BBC College Of Production podcast on ‘budget film making’