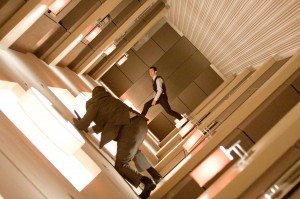 Human beings are meaning making machines – as screenwriters it is our job to guide and manage the meanings that our audiences make, but in such a way as they are unaware that we are in full control.

I just rewatched ‘Inception’ last night and I am still reeling from the experience. Every five years or so a film comes along that raises the bar, reminding me that good is not good enough, great is just about passable, and world class is really what I need to be aiming for.

And I write all of this with Hans Zimmers thunderous score is shaking  the office walls, while the memory of the behemoth screenplay for ‘Inception’ rattles around my subconscious, reminding me of just how good that script has to be. As those end credits rolled, I could not help but marvel at the craftsmanship I had just witnessed, both as a director, but more so as a screenwriter. Weaving that story in the way that he did, that takes a certain kind of talent. It’s a mystery to me how Chris Nolan could do it. But maybe that’s part of the attraction.

You see human beings love mystery. A story is all about ‘what’s around the corner?’ Last week I re-read ‘On Film Making’ which I wrote about on the blog here. In his book, Mackendrick has a list of helpful phrases for writers, including (and from memory) ‘What is happening now is not as interesting as what is about to happen…’

One of the things I learned on my second feature film was that if I cut off the end, or the resolution, to a scene, I could increase mystery, pace and maintain forward momentum. I learned this in the edit and not at the script stage (which would have saved a lot of wasted time and money). I have just been doing this same process but with the ‘Rocketboy’ script. And the results are truly amazing.

What can feel essential when you write it, can also reveal itself to be redundant when you read it (with a critcal eye).

As Mackendrick also said, ‘It’s as much about what is NOT said as it is about what IS said’

For example if a scene is about a proposal… John asks ‘Will you marry me…?’ and Jane pauses before smiling and saying ‘Yes!’ So in the edit, cut off the ‘yes’ and leave the audience wondering – ‘what did she say?’

The answer will come in the next few scenes anyway. This maintains forward momentum and mystery. And this principle is not always about big scenes, this tip works on a micro level too. Try it in your scripts.

Of course this all goes wrong when ‘mystery’ tips into being ‘cryptic’ for the sake of being smug or clever. ‘Inception’ was constantly revealing a mystery, always going deeper, but it always felt like it would make sense as long as I kept up. I did, and it did make sense to me. Sure there are some story points about which I am unsure, but that just makes me want to see it again. Kerching! Brilliant!

So what can we, as indie film makers, take away from ‘Inception’. For me, I think the most important message is that Chris Nolan has proven, yet again, that audiences are very smart and actually LOVE to work for their story and characters.

Talent is great BUT relationships get you hired
The future of the British Film Industry is in YOUR hands, and not in 'THEIR' hands...
The mountain lies ahead and my feet feel heavy...
The FIVE reasons your career is held back… and how to fix it
Rocketboy redraft complete and the art of minimalism
Pitching Your BIG project and the tools you should take into the room
Exclusive Interview with Christopher Nolan and Emma Thomas from our Guerilla Film Makers Archives