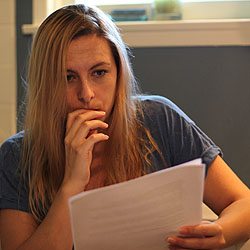 Here’s the problem. You go for the audition. You slay it. YOU ROCKED! But, you don’t get the part. Sound familiar?

When you give other people control over your destiny, your career is going to be a very bumpy ride. It’s that simple.

For years now I have been advising actors that the smartest thing they can do is become filmmakers, directors and producers… and cast themselves in the lead role.

The skills, philosophies and ambition behind an acting career is VERY close to that of filmmakers and producers. Really, we are all just different sides of the same coin.

Remember, broke and struggling actors Sylvester Stallone, Ben Affleck and Matt Damon all did this and ended up wining Oscars.

Above is a short film for an initiative we created called 50 Kisses. It’s produced by, and stars, actress Kerry Finlayson. She is a Brit who moved to LA and has taken charge of her career by becoming a producer. It’s a great example of creating your own success over one weekend!

So what are the challenges and benefits an actor faces when making the move from in front of the camera, to behind it?

1. They understand the value of the performer
Many filmmakers don’t get how important the actor is. They obsesses about cameras, editing, props… everything EXCEPT the very heart of their film. As an actor, you won’t make this shockingly common mistake. Plus you will know better than most filmmakers just how to treat fellow performers, to get the very best from them.

2. Actors know how to connect quickly
Actors are engaging by nature – this is the very quality you need as a producer or director if you want to get people to help make your film – be it other actors, crew, financiers… Just add enthusiasm for your project and you are way ahead of the pack. Charm, wit, engagement, enthusiasm… you are on you away.

3. Actors know actors
Most actors have a large circle of actor friends, some of whom are ‘names’ or ‘faces’. From a sales and marketing point of view, getting those  ‘names’ and ‘faces’ involved will attract more talented actors, crew and money. It will also help sell the movie at the end. But perhaps the biggest benefit, is those ‘names’ or ‘faces’ are usually very experienced and will bring that experience to the set.

4. Actors have ambition and ego
Actors can go for 100 auditions and fail to get a job. And what do they do then? Take more classes, go for more auditions, join another online network… To do this, you need loads of ambition and a large ego. This is not a bad thing. You need both of these to make it as a filmmaker too. That does not mean you have permission to be a dick. You MUST lead from the front and remain humble and sensitive. But ambition and ego will get you out of bed early and keep you working into the wee hours… It will also inspire others around you too. That get up and go, focussed on filmmaking, will be 75% of the reason why you will succeed.

5. Actors read lots of scripts
Most filmmakers read far to few scripts. Actors read lots and can spot good writing on the page. On the flipside, actors do have a tendency to just read their own parts and see the very best in the writing. The bottom line though is that actors are expert readers. Start to read the whole script and not just your part. And seek to find solutions to story problems through character, working humbly with the writer and director. In my experience, the best actors can contribute huge amounts in this way and usually ask for lines to be removed, not added.

6. Actors never forget
Among the kit, the chaos and the behind the scenes drama, actors are less likely to forget that the most important thing is the actor and emotional connection they can create. Never EVER forget this.

Loads of work
1. I won’t lie to you, the workload is immense. Surround yourself with experience and hard workers. First AD’s and experienced production staff are people to make friends with. DO NOT ask actor friends to step into these roles unless they have experience. You will be the weak link in the chain, due to workload, distraction (you are also acting) and production inexperience – so where possible, make sure those other links are robust and delegate as much as you can. No-one will care what was for lunch by the time you get to the premiere, but they will care about their experience watching the movie.

2. Right brained actors
Actors can be very emotional and often right brained. Of course, it’s their job to emote. But, filmmaking can be very procedural and technical, taxing the left side of your brain (and probably less dominant side). You may struggle with these aspects, but again, you can lean on others for help. Do shot lists, storyboards and lots of rehearsals and you will be in good shape. But don’t underestimate just now ‘left brained’ a supposed ‘right brain’ activity like filmmaking can be.

3. Actors have aesthetics
Actors know what clothes work, and what don’t. They know how to look good. They have real views on sets, dressings and locations (even if they are rarely asked to express it). These may not be pragmatic / operational views, but they can often spot style, balance and aesthetics in the world. They can bring that eye to the process too. Beware of becoming a slave to the aesthetics as filmmaking can often be ‘disaster management’ and it’s important to know when to let go and just get the job done. Learn to make fast choices, relying on instinct and keep the momentum up.

2. Mistaking drama and conflict for story
The process of inhabiting a character and performing large scale human emotional moments can be intoxicating. This is GREAT, but it doesn’t necessarily make a killer story. It’s a component for sure, just make sure that your overall narrative is engaging to the viewer at the end of the process. Study the great screenwriting books to get a handle on story structure and avoid making a film filled with amazing characters and performances but no gripping yarn.

3. Casting your friends
Filmmakers do this too. Cast your friends. Only do this if they are the best actor you can get for the part. Don’t be lazy.

No-one is hungrier for YOUR success than YOU.

If you really want to take control of your own destiny, start making films, maybe just shorts at first – you can have it shot over a weekend for instance – and start to build your career by PRODUCING and not just auditioning and hoping you might give the right impression with your acting, or you are the right height and look, or you made a connection, or… the list goes on.

If this is resonating with you, come along to the Guerilla Filmmakers Masterclass, a two day film school that will get you making your first movie RIGHT NOW. There will be hundreds of other actors, producers, directors, writers there looking to network with you too. Check out the site here… www.GuerillaMasterclass.com

Good luck and see you at the Oscars! And please add your insights and ideas below too.

Working with Actors, interview with Olivia Williams
Frank Spotnitz on the Writers Room Dynamics and 10 Pieces Of Supernatural Advice
How I Cast Brian Blessed, Joanna Lumley and Jack Davenport in my fantasy short, Guest Blog...
How Actors Can Radically Improve YOUR Script
Auditioning Kids All Day

2 Responses to An actors guide to producing: Cast yourself in the lead role