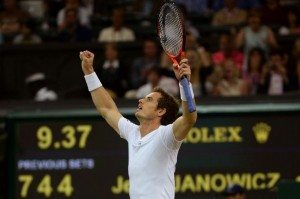 Watching Andy Murray win Wimbledon brought a tear to my eye and lump to my throat. For me, he represents everything I hold up as heroic. A person who has mastered his craft, though discipline, past repeated failure, focus and courage.

And yet, when he is at the top of his game and he is given the spotlight, he glows with humility. Again, for me a deeply heroic trait.

He knows how far he has come, he knows what he has achieved… and I suspect, he knows the journey is the real reward.

Andy is not unique. Listening to the defeated Novak Djokovic, all I could hear was the same commitment, focus, courage and humility. And in defeat, he is still an extraordinary hero, and the crowd acknowledged this.

In the ancient texts, the death of the hero was a common outcome of great stories – after all, going to battle usually ended in a terrible death toll, often the hero being killed. Their death, subsequent ‘resurrection’, and final immortalisation through the story, inspired people to pick up the flame and continue the journey and battle. It gave meaning to sacrifice of the hero. Now they would sit by the side of the gods in skies.

Sportsmen and women are in many ways to us what these great warriors were to their communities back then.

I really do hope that young minds in Britain connect with this moment, and the many sporting moments over the last year or so.

We have had an amazing twelve months, starting with Olympics, topped by the truly awe inspiring Paralympics, and now Andy Murray at Wimbledon (not to mention Bradley Wiggins). What better role models could we ask for?

But there is a dark side of these heroic figures too – people who crave celebrity status as though it gives them the same value to us as that of a hero.

People who act, behave and think they deserve acknowledgement and adornment, but without having achieved anything through consistent discipline and courage. What is left is an empty vessel that looks a little like a hero, but is far from it.

For young minds, celebrity offers a helicopter ride to the summit, a quick fix, all shiny, sexy and apparently powerful. But their power is always fleeting and comes from without and never within. Nevertheless, like the shapeshifter, they do seduce young minds and for me, they are terrible role models for our kids.

I have seen some of this in my career – with high maintenance actors and a few crew members with very high self opinions and little to back it up. For me the warning signs are always the same, looking for shortcuts to greatness, making outrageous demands and statements, and wanting to be the biggest voice in the room.

They often disappear into obscurity.

I have had the privilege of working with greatness on a few occasions too, and when that has happened, I have myself been humbled by the self knowing, almost ‘stillness’ of these people. When one becomes a master one need not try. It is who you are.

I am sure that we will be talking about Andy Murray and Wimbledon today, telling our own personal stories of where we were, what we felt, what it means to us… And so, like Fred Perry before him, a legend is born.

So we got another email from Oscars.org…
It’s not that shit happens, it’s how we deal with it that defines us
How best to be a filmmaker in 2015?
Why complaining to your friends will get you nowhere fast...
The anatomy of creative failure and how to avoid it... turn the impossible into the inevit...
Beware of putting your actors next to a wall… it could kill the aesthetics of your film
How To Self Distribute A Film: Masterclass with Marcus Markou (Podcast)