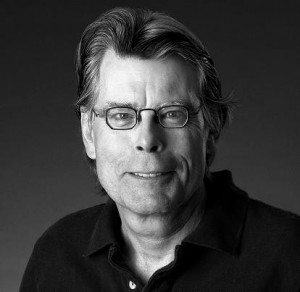 I love Stephen King. As a kid I worked my way through a mountain of his books.

Years later and as a filmmaker and screenwriter, I discovered his book ‘On Writing’. For me, this was a gamechanger read.

Not because it’s a superb ‘how too’ manual (which it is), but because it felt like it was written to me, to help make some kind of sense of the creative angels and demons that dominate my every thought.

Here is a cornucopia of insight, inspiration and guidance from one of the worlds best loved, most prolific and successful writers, Stephen King.

‘The scariest moment is always just before you start.’

‘You can, you should, and if you’re brave enough to start, you will’

‘I have spent a good many years since―too many, I think―being ashamed about what I write. I think I was forty before I realized that almost every writer of fiction or poetry who has ever published a line has been accused by someone of wasting his or her God-given talent. If you write (or paint or dance or sculpt or sing, I suppose), someone will try to make you feel lousy about it, that’s all.’

‘Fiction is the truth inside the lie.’

‘Life isn’t a support system for art. It’s the other way around.’

‘Talent is cheaper than table salt. What separates the talented individual from the successful one is a lot of hard work.’

‘Only enemies speak the truth; friends and lovers lie endlessly, caught in the web of duty.’

‘Wherever you write is supposed to be a little bit of a refuge, a place where you can get away from the world. The more closed in you are, the more you’re forced back on your own imagination.’

‘The road to hell is paved with adverbs’

‘As a writer, one of the things that I’ve always been interested in doing is actually invading your comfort space. Because that’s what we’re supposed to do. Get under your skin, and make you react.’

‘Bad writing is more than a matter of shit syntax and faulty observation; bad writing usually arises from a stubborn refusal to tell stories about what people actually do― to face the fact, let us say, that murderers sometimes help old ladies cross the street.’

‘Life is like a wheel. Sooner or later, it always come around to where you started again.’

‘Just remember that Dumbo didn’t need the feather; the magic was in him.’

‘The most important things to remember about back story are that (a) everyone has a history and (b) most of it isn’t very interesting.’

‘We make up horrors to help us cope with the real ones.’

‘In many cases when a reader puts a story aside because it ‘got boring,’ the boredom arose because the writer grew enchanted with his powers of description and lost sight of his priority, which is to keep the ball rolling.’

‘The place where you made your stand never mattered. Only that you were there… and still on your feet.’

‘Writing is a lonely job. Having someone who believes in you makes a lot if difference. They don’t have to makes speeches. Just believing is usually enough.’

‘I think talent as a writer is hard-wired in, it’s all there, at least the basic elements of it. You can’t change it any more than you can choose whether to be right handed or left handed.’

‘Sometimes you have to go on when you don’t feel like it, and sometimes you’re doing good work when it feels like all you’re managing is to shovel shit from a sitting position.’

‘You see something, then it clicks with something else, and it will make a story. But you never know when it’s going to happen.’

‘Description begins in the writer’s imagination, but should finish in the reader’s.’
‘If you want to be a writer, you must do two things above all others: read a lot and write a lot. There’s no way around these two things that I’m aware of, no shortcut.’

‘No, it’s not a very good story – its author was too busy listening to other voices to listen as closely as he should have to the one coming from inside.’

‘Like anything else that happens on its own, the act of writing is beyond currency. Money is great stuff to have, but when it comes to the act of creation, the best thing is not to think of money too much. It constipates the whole process.’

‘I’m still in love with what I do, with the idea of making things up, so hours when I write always feel like very blessed hours to me.’

‘I had a period where I thought I might not be good enough to publish.’

‘Amateurs sit and wait for inspiration, the rest of us just get up and go to work’

‘Get busy living, or get busy dying.’

‘Roger and Me’, Interviewing Roger Corman at the Great American Pitchfest, full Podcast
Top ten Stanley Kubrick Quotes
Clint Eastwood: Top ten quotes for writers and filmmakers
Ken Loach, top 13 quotes for filmmakers and screenwriters
Top Ten Quotes for creatives by Steve Jobs
Why you are not successful yet. The truth.
50 Kisses on BBC Midlands Tonight