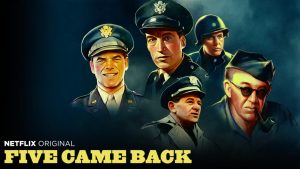 ‘Five Came Back’ is a three part Netflix documentary about five Hollywood directors who ended up shooting and making documentaries for the US government about the Second World War, often from the battlefront and in genuine peril.

My parents lived through WW2 and my dad was a conscript in the years after the war, stationed in Egypt. My mum would often talk about hearing the planes fly overhead s they huddled in a bunker at the end of the garden, Nazi bombers on raids in Liverpool. In contrast, my dad never once spoke to me about his experiences. I had the very strong sense that it was too upsetting for him.

So I have a personal interest and connection through my parents to what is becoming an increasingly distant conflict, especially for younger generations. I was looking forward very much to this documentary but was not fully prepared for how heavily it would land on me.

It’s a stunning documentary series, filled with footage and story I had never seen or heard before.

Constructed over three episodes it  follows the journey for Frank Capra, George Stevens, John Ford, William Wyler and John Huston, five Hollywood legends who were increasingly drawn into madness and inhuman behaviour. D Day was enough to see John Ford disappear into bottles of booze and effectively end his filming of the conflict.

I won’t say too much as you should watch yourself, but what I will say is that for me personally, it re-ignited the reasons why I choose to do what I do.

To tell stories that make a difference.

All of these Hollywood legends returned to LA and in due course produced their best work….

It’s a Wonderful Life, Shane, Giant, The Best Years of Our Lives, Roman Holiday, Ben-Hur, The Treasure of the Sierra Madre, The Misfits, Rio Grande, The Searchers… 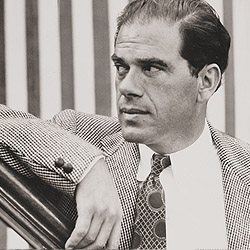 Of all their stories, Frank Capra stuck with me the most.

Director of arguably one of the greatest movies of all time, ‘It’s a Wonderful Life’ was shown in the documentary in a clip from when he was recognised by the AFI and given a lifetime achievement award. His words, which you can hear and watch above and read below, really hit home and hard.

He attributed his success to…

He then offered a word to the new generation of filmmakers (which was at the time in the eighties and of course feels just as relevant today).

And then the gut punch.

‘Because only the valiant should create. Only the daring should make films. And only the morally courageous are worthy of speaking to their fellow men for two hours and in the dark.’

And so it’s only apt that over the last few days I have been reworking the screenplay for ‘Rocketboy’ with Judy. It’s time to shoot for the moon, or perhaps even beyond it.

The future of the British Film Industry is in YOUR hands, and not in 'THEIR' hands...
Kick Ass 2 writer director Jeff Wadlow podcast... don't ask permission, ask forgiveness
John Cleese Podcast Lecture on Creativity and Originality: The 5 factors that you can arra...
Whenever you feel like giving up, remember... Victory is close
Why the act of creation is ESSENTIAL for human beings
How I Got My Feature Film On Amazon Prime and How Much I have Made
Shooting my first film on an iPhone – what we Iearned