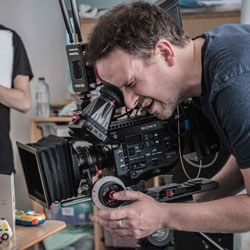 arlier this year we shot this little Xmas film to highlight the challenges some older people face in the winter months. It grew from the idea and question, ‘what would happen if Father Christmas needed physio?’

The script for ‘Never Too Late’ was written by LondonSWF delegate Jon Ryan who we also collaborated with on ‘Rehab Matters’ that was a huge success for the Society of Physiotherapy last year.

We are all very proud of this little movie too, it does seem to bring a tear to the eye for many people, and also genuinely helps highlight an issue. 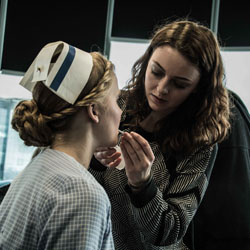 Of course it was made for very little money and of course, I want to thank and congratulate everyone involved, production, camera… But especially the often under appreciated trifecta of costume, makeup and production design whose life was made hell by many locations, set over several decades, with an enormous cast and KIDS!

We even pulled snow out of the bag with a super cheap snow machine of Amazon. So thank you Linda, Jason and Natasha and your respective hard working and in this case, very much appreciated teams.

As an aside, and also part of the genesis of the narrative, not many people know this but when I was a young man, I was a ‘Stunt Santa’. 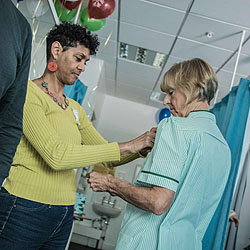 Wait what? I was the Santa that came into town on a boat or on a fire engine, hanging on for dear life in the days before Health and Safety. As I entered the department store there would be a moment where I would disappear into the grotto, only to do a switch with the old man who would play the ‘real Santa’ for the kids – he would come out and the illusion was sealed. Parents could always see the switch, but the kids never seemed to. I do love the magic.

I do hope you enjoy watching as much as we enjoyed making it! And here are the behind the scenes we also put together for the film…

What can we learn from 15 second horror winner ‘Emma’?
Watch the short film 'Rehab Matters' that we made over summer
Never To Late and the Casting Process…
Creating the magic of the Nativity... on a shoestring
Genesis of our Santa Hit Film... Not many people know about this but I do a lot of Santa w...

The Guerilla Filmmakers Masterclass Black Friday… MAKE YOUR FILM!
What REALLY Happened At the Twisted50 Awards and Launch?