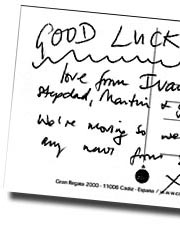 I have just spent a frantic week, working on casting and all sorts of other stuff. There will be a script redraft very soon, and this little tweak I hope to be the final one. Most important though is that cash has started to flow into the production- pictured is a post card that came from one person wishing us GOOD LUCK! SO THANK YOU EVERYONE.

We have also had a huge amount of well wishers and we feel humbled by people’s generosity.

So far, hard cash, we have had £1,850 donated, mostly in £50’s and £100’s. But we also had one £500 donation! Blimey! We have also had promises of more from people who can’t donate just now, but who really want to be involved and help get it made. Literally, can you wait until I get paid at the end of the month! Amazing. Truly.

There is a rumbling too, for a very large chunk of cash – we hope to make an announcement about that later next week. So we are well on our way to getting there, which is terrific news. But we are not there yet, so please, if you want to get involved, or know anyone who does, take action now and go to http://www.livingspirit.com/GFpayment.htm

Next week is a final week of gearing up before we actually move into a more formal pre production.

So here are our Associate Producers so far…

You can read more about Gone Fishing here

More Cash and Crewing!
What's the secret to getting through a huge script on limited resources?
How To Fund A Film... what our delegates got from it.
The Three Pillars Of Successful Low Budget Horror Film Production
I am supporting 'Clowning Around', are you?
Gone Fishing on Korean Fishing TV channel!

Auditioning Kids All Day
We are getting there!