By Chris Jones on September 22, 2007 in Screenings, Screenplay, Training 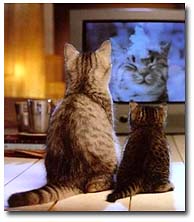 Blimey. What an evening. We had about ten people round and we watched it on my big video projector. This was an offline cut, with temp music and sound.

After the film played, I asked a number of questions and we entered a three hour discussion which was extremely useful. I don’t want to detail the outcome of this conversation yet, as that will act as a story spoiler. But, we did discover a number of facts about the story that need urgent attention. Most of the problems centre around the interpretation of certain events and what they mean in the great scheme of the story.

We were left with a number of simple editorial choices, problems that could easily be fixed by simple cuts and trims. We are also going to need to do some additional dialogue, off camera, and perhaps a little re-voice job too. We already had a list of shots to film in a pickup day, scheduled in a couple of weeks time, and now there are a few more to get too.

Of course I am focussing on the problems, but the overall reaction was overwhelmingly positive. The story, cinematography, performances etc., were all highly praised. Most people were frankly, blown away, and everyone had a tear in their eye at the end.

Overall, really great stuff. It’s so fantastic to get feedback now, so that changes can be made before the premiere. I am also happy that both Eddie and I are behaving in a completely professional and non-precious manner, embracing both compliments and criticisms, filtering and re-planning. It’s really fantastic to be working with such professionals.

We are now meeting on Monday to do a recut and see how that feels.

DP, Vernon Layton has been on the blower too, asking about how it all went. I have nothing but utter respect for Vernon. Many other cinematographers would be asking ‘how does it look…?’ where Vernon is asking, ‘How did it play…?’ A crucial difference. Vernon understands and respects that the film is a whole experience – image, sound, music, script, performance, setting etc.-  not just a string of attractive images. For me, this is what makes him a great cinematographer and a wonderful energy and influence to have around you on set and in post – and who knows, I hope in the script stages for future projects.

For those of you who have made a donation to ‘Gone Fishing’ (£100 course pack), we will be screening this first cut on the course, discussing the feedback, and then moving on to the next cut. This will illuminate the path we take as story tellers and how we refine ideas and narrative to be as succinct and powerful as possible.

12 ways to rewrite your British written spec script so it sells in Hollywood
Why story days are essential for your screenplay: Rocketboy redraft nears completion
EXAM: Meet the filmmakers, read the screenplay...
Project: Rocketboy... top ten tips for getting feedback on a screenplay
David Mamet Screenwriting Masterclass in a memo
Stills arrive
The budget is in…