By Chris Jones on September 19, 2007 in Post Production, Shooting 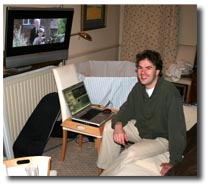 I spent the whole of last night with editor Eddie Hamilton as we fine cut the first assembly of ‘Gone Fishing’. We have been cutting using a Dell laptop, digitising in offline media at DV50 from DVCam, and then using a 32” domestic telly as a preview monitor. It all works flawlessly. As I mentioned in earlier posts, I have a cloned drive of the media so I can just open the project when I am at home and it’s all there to see. This means Eddie can make changes and email me a tiny file so I can see in full res, what he has done.

The film has come together very quickly and with very few problems. Both Eddie and I are not precious, meaning we can get brutal very quickly. This means even this first cut ripples along at quite a pace.

Only one shot has a small technical problem, and we have enough of the performances to really shape the story. We locked picture last night, showed it to Eddie’s wife Charlotte and then re-inserted a scene. I have my own views still and I think we may drop that scene, and there are a few other little bits I think we can also remove. But for now we are keeping them in for the test screening with a live audience who know nothing about the story – this will take place on Friday. Should be fascinating.

We also made a list of pickup shots, things we were unable to get during the main shoot, or that have become apparent in post production. Vernon has already confirmed he will be coming back for that shoot. I can’t wait!

In the meantime, Eddie will tweak and edit the sound in the evenings, making it as close to a real film experience as possible. This is so that our test audience just get jolted out of what they may think of as a nearly completed film. I can’t wait to see what responses we get. Meanwhile, we continue to tie up loose ends, finalise the budget so far, and prep for the pickup shoot in a couple of weeks time.

After years working in the real world finding my life rushing past me faster and faster, i...
Day Of The Flowers: Ten Tips for shooting in the heat and humidity abroad
Dragons, Reapers and Guerilla Filmmaking: Turning Writer to Director With My First Short ‘...
Post Shoot Blues
Stills arrive