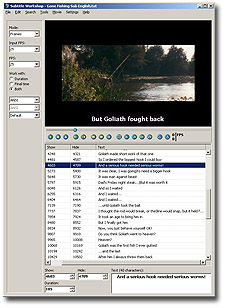 I have been working on festival plans today, and specifically on the world premiere.

Cannes is looming and it would be great to get into competition there and give them the world premiere. I have been reliably informed that if we have already done French subtitles, that will work in our favour – and so today, I have been figuring out how to get subtitles onto a DVD. It’s actually not too hard.

I downloaded a super little freeware program called Subtitle Workshop, imported a video file and then just typed in the titles where needed. You can download it here if you want to do sub titles yourself.

Subtitle Workshop then generates a simple text file, much like an editors EDL, which has ‘in’ and ‘out’ timecodes and also the text to display between those two points. This file then imports simply into Adobe Encore.

It’s a little cryptic at times, but once I got it figured out, it was pretty simple.

Now the problem is that I need the script translating – I have a German translator, but I also need to find French, Italian and Spanish translators too. I am going to ask the Associate producers tonight if they know anyone – it’s less than an hours work for anyone who speaks that language as their first language.

There’s always something else to do!

Using video blogs to share your film experience... Rhode Island from the archives
50 Kisses selected for the Rhode Island International Film Festival 2014
Top Ten Things I Learned From My Last Film... And the REAL driving force behind it
Nothing is constant, except change… The death of Prime Video stores
Day 1 at Incubate in Tilburg
50 Kisses Premiere Announced - Are you coming?