Last year I helped out in the making of a short film called Chasing Cotards. I add my help was minimal!

Ed and Sam who made the film have kept in touch as they entered into the festival experience. And what they told me was heart breaking, submission after submission followed by rejection after rejection. From Gone Fishing I knew this feeling very well.

I had a chance meeting with Ed in a supermarket two months ago – he looked ravaged by the festival experience.  As his film is similar in tone to Gone Fishing, I made few more suggestions, including Sedona (my video blog above). The good news is that Chasing Cotards has just been accepted to Sedona. So I asked Ed to share his thoughts on the festival experience so far…

Chasing Cotards Hitting Film Festivals
For those of you who do not know who we are… we made the biggest short film of all time, Chasing Cotards starring Andrew Scott. We make this proclamation because we shot our film back in September 2009 on a VistaVision Camera allowing us to present our movie in full 70mm glory at the BFI IMAX Cinema for our Premiere on May 8th 2010. This claim allowed us to use a PR campaign that helped us fund our film, bring in a remarkable crew, find two highly established actors and, more importantly, get recognised within the Independent film world.  The IMAX factor of our film is the main reason our film happened.

However, now that we’ve had our IMAX Presentation and begin the Festival push…

…it doesn’t mean a thing.

It has been the biggest gearshift in our mentality while entering into the festivals. For the best part of two years we’ve been promoting ourselves and selling our movie as the biggest short film of all time and, as I say, have had a considerable amount of success doing so. But, the main problem with hitting the festivals with the same tagline is that they don’t all have IMAX screening capabilities. There are a few that do, but on the whole, it isn’t really an option. Meaning…

…we have had to start from scratch.

We have started entering the movie into the film festival circuit and I have to be honest, it has not been an easy start. And I can’t help but feel it isn’t going to get easier either. Our experience thus far is that festivals are an expensive, complicated and political process that is an extremely difficult process to get your head around. I’ll try and break down the three roadblocks I have listed above to try and explain better…

EXPENSIVE
We were smart enough to put some money aside from our overall budget towards our festival push. We are entering into 50 festivals in total and the cost is high. After adding up submission fees, creation of DVD’s and postage of material, the total cost is going to be around £1500. This is BEFORE we find out of we are even accepted anywhere, meaning the total cost can only rise. We’ve been told that no matter how good your film is you usually make it into 10% of your total number. So, if we’re lucky, we will make it into 5 film festivals. That is a lot of money for the hope of 5 festivals, and if you get into those 5 festivals, they will cost you in promotional material (printing), hotel fees and travel /food / drink for the time you are there. So, make sure you save some money if you can.

COMPLICATED
The amount of paperwork that is involved in entering all these festivals is a logistical nightmare. There is a website out there called withoutabox.com which allows you to upload all the details of your film and then you can enter into their accredited festivals through their website. However, not all the festivals go through withoutabox – in fact, most of the main ones don’t. Meaning you have to go through this same process again! It sounds complicated and it is complicated. Prepare yourself for a headache.

POLITICAL
Unfortunately, like much of the film industry, I have been told that the festival circuit is more about who you know, rather than how good your film is. I have been told time and time again that you cannot take any rejections as a sign that your film isn’t very good, because it’s mainly about whether your film has received notable media coverage or if you know someone or if someone you know knows someone on the panel. This is annoyingly something you can’t fight. And, if you can use it to your advantage then do… we certainly have.

In short… it’s hard work. It’s also not a process that makes me as a filmmaker want to keep on making films because I know this nightmare awaits it when I’ve completed. But, I know I will continue to make films. I know I will because it’s an addiction, it is a want to tell stories. Something inside me bubbles up and moves my body in a direction where I want to make films. I can’t help this; it is not something I feel I can control. So, I will have to just keep making these films and enter each festival push with as much enthusiasm as possible.

The other reason why I know I’ll do it again is because we’ve just been accepted into our first festival. It was Chris Jones himself who suggested we enter into this one (please see the section above titled ‘POLITICAL’) and they have ever so kindly selected us for their prestigious festival. The reason why I say I know I’ll go through it again is because this feeling of being accepted makes all the hard work worthwhile. Chasing Cotards has been officially selected into The Sedona International Film Festival and saying that feels good. It feels very good.

My advice for those going into the festival push is this… definitely do it, but make sure you are prepared. Be aware of how much hard work it is and prepare for everything listed above.

Just like Gollum loves and hates himself and the one ring, you will love and hate the festival film submission process in equal measure. 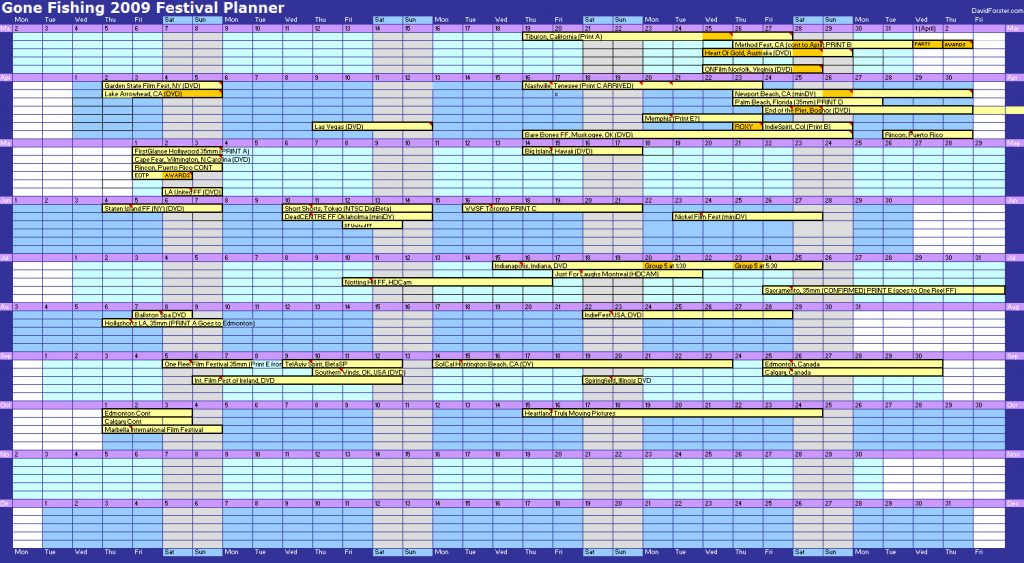 Thanks Ed… And good luck in Sedona, it was my favourite festival so I am sure you and Sam will have a great time.

You can read more about Chasing Cotards here.

You can read about our final analysis on the Gone Fishing festival experience here, including spreadsheets.

Dragons, Reapers and Guerilla Filmmaking: Turning Writer to Director With My First Short ‘...
Using video blogs to share your film experience... Rhode Island from the archives
Stunt Co-ordinator gets onboard
Exclusive Interview with Christopher Nolan and Emma Thomas from our Guerilla Film Makers A...
After years working in the real world finding my life rushing past me faster and faster, i...
Subtitles for Festivals

A guide to film finance and funding – are you going to get funded or financed?
Is your film this year going to be a world class, award winning, door opening masterpiece?