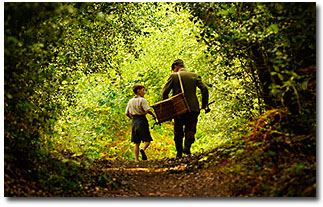 The last few days, I have been working on ‘The Image’ for Gone Fishing. This is to be used for posters, postcards and the like. We need artwork to represent the character of the movie, not the characters in the movie, and also to relay the theme in the narrative. We have a few great shots, including this one above which was shot by DP Vernon Layton. For me, this image is reminiscent of 'The Walk To Paradise Garden' by American photographer Eugene Smith. Smith was wounded in battle, and was driven to 'make a photograph that was the opposite of war' (which featured his kids).

The image (or key art as it is referred to in features) for a short film is different from that of a feature film. First off and most important, the image is going to be seen to an entirely different profile of audience member. They are generally already captive, they want to see these films, they want to take risks (or they would not even be watching short films), and perhaps they are a little jaded with being sold to in a very aggressive way. Second, short films are NOT feature films, and to sell them like features would be a mistake in my mind, in fact, sell is too strong a word in many ways (though let’s keep our eye on the ball, it really is selling).

All this means that we need to lean toward a more subtle and artistic image. But, for my money, it still needs to convey the overall theme, albeit a subtextural theme, of ‘love that last for ever…’

Also there is the issue of the movie title logo to go on the poster and cards.

So I think it’s time to go to the big guns. I am going to be getting in touch with some big design agencies that handle movies and see if I can convince them to consult on the image.

It’s vital to get this one thing right, as this will represent the movie in print, and it needs to be – in fact this is quite amazing – filtered through my three keywords I used during the shoot – cinematic, sensitive and confident.

I have recently been struck by how much work a short film actually is, specifically when working at this high level. It’s not as much work as feature, in terms of sheer quantity, but for sure, just as many hoops need to be jumped through. So the steps in the journey remain the same, they are just shorter steps. It reminds me of how much of a marathon film making can be.

Top 13 Things To Do When Being Interviewed for Radio About Your Film
Gone Fishing on Korean Fishing TV channel!
How to organise, run and host a successful film premiere: Top 21 Tips
50 Kisses HUGE Box Office Success... The numbers are in!
Gone Fisihing Seminar on DVD and March 16th
Webstats for Gone Fishing Trailer