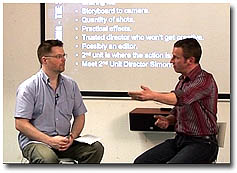 Over the weekend, at the Met Film School at Ealing Studios, I held the Gone Fishing seminar for the last few people who had helped in the making of the movie. It was a stand out event, mainly because the group was small and intimate, giving us a chance to really have some great discussions. I also managed to get second unit director Simon Cox, costume designer Linda Haysman and sound designer Bernard O’Reilly to attend too, adding their experience and knowledge to the mix.

We also filmed it, to add to what we shot at BAFTA. This means more editing work for James, who is putting the DVD set together, but for now, it looks like it’s really going to be an exceptional box set.

Like making the movie in the first place, the seminar took on the qualities of a marathon… But we got to the end and survived! What is really great about doing these seminars is that I get as much out of it as anyone in the group. I should be exhausted this morning, but frankly, I am still buzzing and can’t wait to get on with my day. It’s such a pleasure to be in a room with a group of creative people who all want the same thing – to make something terrific that reaches an audience. So thank you to everyone who attended.

Here's what some of the attendees said…

'…An in-depth, very well prepared and organised seminar, that gave me an awesome technical insight into film production… especially on a 2nd Unit… and how a talented, enthusiastic film editor is, in effect, actually the 2nd director on a production, and contributes a substantial amount. Good luck with the festivals and to everyone involved in GONE FISHING…" – Martin Grant, Film Maker

"Fantastic seminar! Packed with valuable information from first hand experience in making a high quality film. I've learnt so much in one day. Truly one of a kind. I would recommend it to all."
Desiree Densiti – Actor/Producer

Right! Now back to the movies…