By Chris Jones on March 8, 2008 in Publicity, Software 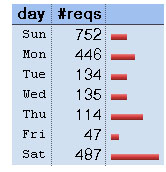 Now the trailer has been up for a little while, I thought I would let you know how it’s doing and how I managed the infrastructure. When we decided to put a trailer up, we wanted it be world class quality, which meant using the Apple trailers website as a template. In turn that meant using the Quicktime H264 codec (which has its niggles I can tell you). We decided to do the trailer in three resolutions, 480P, 720P and 1080P, the resultant files being 18mb, 43mb and 70mb in size respectively.

I had no idea how many downloads we would get, but I knew I needed more storage space and bandwidth than my current webhost could economically supply, so I needed another place to host the actual media files.

Lunarpages was the answer, at £3.99 a month for – get this – 1.5TB of storage and 15TB of traffic (no that’s not a typo, that’s terabytes!). Blimey. So now, no-one can say web delivery can be expensive, it’s cheap as chips. This really is good news for us as web delivery is an avenue that is easy to setup and sell, as long as your content is viewable on a computer (or I guess Media Centre PCs which are becoming more prevalent.)

So how is the trailer actually doing? Well I have had a lot of emails congratulating the team on it, which was great. So far we are averaging hits of around 250 a day, which I feel is pretty good. We had spikes on Sunday, Monday, a massive lull on Friday and another big spike on Saturday. So the highest traffic seems to be at weekends and Mondays. In terms of time of day, most downloads happened at lunch times, early mornings or very late at night. It seems that most of us still have day jobs!

I have also hosted two podcasts on Lunarpages. One with Adam Davies on funding, and the other with me about the Gone Fishing seminar next Sunday (you can hear it here but its not officially released from my site).

You can also view the Gone Fishing trailer here.

How to organise, run and host a successful film premiere: Top 21 Tips
Gone Fishing on Korean Fishing TV channel!
Top 13 Things To Do When Being Interviewed for Radio About Your Film
50 Kisses HUGE Box Office Success... The numbers are in!
Top Ten Things To Consider When Mixing The Sound For Your Film In A Professional Dubbing T...
Getting the right image for Gone Fishing
Dolby Digital MO disk collected