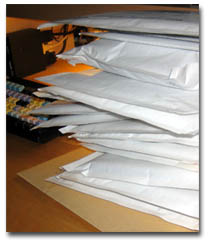 I spent most of the day submitting Gone Fishing to a long list of international festivals that we have researched and targeted. I don’t want to say which they are (for inter-festival political reasons), but needless to say they include the likes of Sundance, as well as some other more esoteric choices. WhithoutABox.com is really great for doing this, it’s just a little frustrating that it is STILL so USAcentric – not exclusively of course, but certainly leaning that way. And there is no doubt, I could have never filled out the forms for all of these festivals and mailed out in the record time that I managed if it were not for WAB. So really, a big advance for film makers once their film is completed.

One thing that is really coming to the fore now is just how much I have used VistaPrint. I have business cards that fit into gatefold folders, and have just ordered custom post it notes to stick on stuff I send out – believe it or not, proper scientific research shows that people are more likely to act on a hand written, personal post-it note stuck to a DVD case than they are an email, letter or other more formal communication. It’s all part of the fascinating way that we communicate as human beings. So this time next week I will have subtly branded Gone Fising sticky-notes, care of VistaPrint again.

I am also very happy that I worked as hard as I did to get the artwork for Gone Fishing as good as it is. I would feel much less confident IF the posters and DVD’s I were sending out didn’t look so damn shiny and professional. It just makes a powerful statement as it drops out of the jiffy bag. It’s amazing though, just how long it takes to label and pack up 20 DVD’s, even with label printers and the like, and it’s a stark reminder of the marathon that we film makers face – if only it were all about being on set!

So let’s see how many of this first batch of festivals come back with a YES! or a NO! I have high hopes.

The top six film festivals in the world, based on my experience... and none of them are A ...
Using video blogs to share your film experience... Rhode Island from the archives
Tomorrow I Fly Out To Finland for the Tampere Film Festival, and maybe the Northern Lights
Canon 5D MkII versus Film in the real world… the result?
The 2 second film festival poll with live results... are they worth it?
FREE online seminar, 'Making Web Based Comedy and Films' with the Misery Bear Team
Gone Fishing FREE Screening Odeon Covent Garden, Sunday 6th July
Gone Fishing at the Odeon!