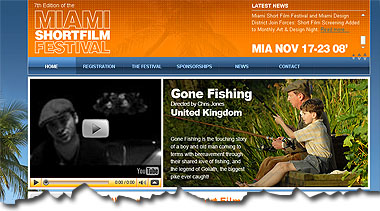 We have been submitting like crazy to a bunch of international film festivals, and hopefully, they will start to kick in around now and I will start to announce each as they are added to my schedule. We held back submitting until recently because we wanted to launch Gone Fishing around Oscars time, so that when it came to considering the nominations, the film wasn’t that one the voters saw or heard about last year, but the one they saw week. It’s all tactical.

We have now committed to several festivals though.. First off is Dinard, in France (which apparently you can get there with Ryanair and tickets from Stanstead at £5 return, plus taxes). I will be a guest of Kodak at that festival (as part of the prize for winning the Kodak Award at the Soho Shorts Festival), and I will be speaking before and after the film (though I don’t as yet know the exact date, the festival runs from the 2nd to 5th of October. More info here…)

We are also attending the Oldenburg Film Festival (10th to 14th September) where we are in competition, and the Kiev Film Festival (October 18th to 26th) which is in the Ukraine and therefore all in Russian. That will be cultural trip!

Then there is the Miami Short Film Festival (November 17th to 23rd) which right now, I plan attend and catch some winter rays. Gone Fishing has a whopping great picture on their home page announcing the film will be there and I have already heard from new friends I made at Rhode Island, that they will be there. This is one of the really wonderful things about festivals – you become a part of new and diverse communities, and forge powerful relationships that you can leverage in your future career. All terrific!

But perhaps the most exciting festival coming up, well actually it’s quite a while away, if the Heart Of Gold Film Festival in Gympie, on the upper end of the Sunshine Coast of Eastern Australia (March 25 – 29 ’09). This is geographically quite close to several of associate producers of Gone Fishing and I am looking forward to meeting them all. Also, Toni Powell, organiser of the festival, much like George Marshall at Rhode Island, is committed to an excellent event for both the audience and the film makers. It’s this outstanding passion for movies that I find so wonderful – I can’t wait for the movie to screen there next year! (You can watch a short TV show on Toni and her Festival here – it's pretty inspiring stuff).

This all raises a few hidden problems too. The co-ordination and attending of festivals can turn into a full time job, and while I would love to do this, the next movie and the drive for the Oscars is just as important. So I hope to be able to convince someone to wholly take on board the Festival co-ordination for Gone Fishing (shipping prints, speaking to PR people etc. ) Watch this space.

Day 1 at Incubate in Tilburg
Short Films on the film festival circuit, a view from one film maker... Chasing Cotards
Mankind Is No Island, Interview and Film
The number ONE reason I encourage filmmakers to go to film festivals
Using video blogs to share your film experience... Rhode Island from the archives
The first Meeting With An Agent… More Questions now…
IMDB test one done… ready for test two?

One Response to Next round of festivals annouced…