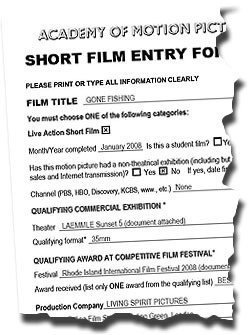 Today is the day.

I am filling out the application for the Oscars 2009, for ‘Gone Fishing’. Once it’s sent off, not much will happened for the next three weeks or so, but then, a whole new PR machine will begin to roll out, both here and in LA.  I will be in touch about his in the coming weeks.

It’s getting very real now, with all sorts of crazy, ambitious and outlandish PR campaigns and stunts being considered. What these are and when they will happen will unfold in due course, but for now, I don’t want to show our cards publically…

So here is the rough timeline.

1. Some time before Feb 22nd (probably in Dec), we may get a call to say we are in the final shortlist (which according to rumour could be between 10 and 20 films). This shortlist has been ‘judged’. Effectively, the Academy is saying, don’t book a holiday in Feb! At that point we need to send a second 35mm print over. If we don’t get this call, we are not shortlisted and will not get nominated.

2. On Jan 22nd, we watch TV and find out IF we are in the final five and have a nomination. If we ARE nominated, WE ARE GOING TO THE OSCARS! If we are not, it’s been a rollercoaster for sure, and it’s time to regroup for the next campaign.

3. If we do get nominated, we step up our PR campaign in LA and we go to the Oscars on Feb 22nd… Hearts will be pounding for sure.

In due course, I plan to write up an explicit timeline of events for film makers who follow after, as it’s been hard to piece together exactly what happens and when and by who.

So again, the dark night of the soul for me… Some demons are being faced…

I must admit, I do feel considerable fear and trepidation. I have got his far, but what if we don’t even get into the final few? What if we stumble at the first hurdle? I feel under prepared, under funded, a stranger in a strange land… But I also know that all of these feelings are in fact my allies, they remind me that I am playing the game to win, that the game I am playing is THE BIG ONE… What fun is there in a game where you know the outcome because you have mastered it before? Or a game that you can ‘buy’ into through personal connection and wealth? Better a game where the odds are stacked against you, that way, even in defeat you also win.

But make no mistake, I am going to play this one as hard as it can be played…

And so, I also just reflect on that fact that the fish in Gone Fishing is called Goliath… rather apt.