(If you have problems watching this video you can also try here on Facebook of here on YouTube!)

So thanks Kerry for once again, attending a festival for us, and for shooting it – though it’s clear there were some technical problems… Doh! Still, a great video document for everyone involved. 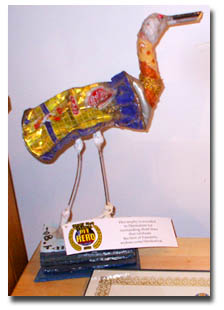 I was particularly entertained to see Lise Romanoff from Vision Films at the festival awards. Lise is a film sales agent and she handles both White Angel and Urban Ghost Story for us, two of my previous  feature films. I gave her a DVD of Gone Fishing last Cannes, but clearly she never got around to watching it. Those of you who have done my two day film seminar will know that I am pretty hard on sales agents, but Lise is the exception, being very professional and rather lovely!

The award for this festival is a unique piece of ‘reclaimed’ art, a bird made from a crushed can and other discarded junk. It’s very striking and everyone who sees it comments on its beauty. So well done Hero Film Festival for awarding great trophies AND making in a difference to the artist… Here is a little bit about him that came attached to the sculptor…

Mamadou Tall Diedhiou from Senegal recycles discarded objects to create on-of-a-kind works of art that give new life to his ‘birds.’ 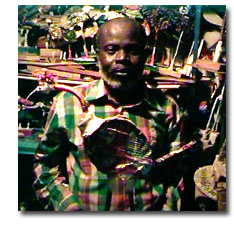 His obsession with birds originated in the small village of Niomoune. As he says, "My passion for birds comes from my village, Niomoune. It is a small, picturesque village populated by all kinds of migrating birds in all seasons. They make their nests, fly in and out, and all the time keep the village animated with their songs."

On the trophy it says… This trophy is awarded to film makers for outstaning short films that celebrate the best of humanity.

50 Kisses selected for the Rhode Island International Film Festival 2014
The top six film festivals in the world, based on my experience... and none of them are A ...
FREE online seminar, 'Making Web Based Comedy and Films' with the Misery Bear Team
Using video blogs to share your film experience... Rhode Island from the archives
Canon 5D MkII versus Film in the real world… the result?
How Getting Involved In A Community Film Festival Can Inspire You As A Film Maker
Chat track recording for the DVD release… all done!
And the award goes to…