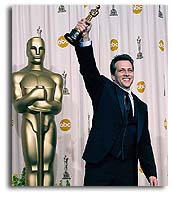 I have been watching a lot of the Oscars short film winners and nominees from the last few years. They are available to buy on DVD and I also believe via iTunes, though I haven’t checked that yet. I just wanted to see what they were really like, in terms of quality, style, feel etc. The DVD’s are available on Amazon and released by Magnolia Home Entertainment.

To say this is an eclectic film collection would be an understatement…In the last few years, winners have included..

The Mozart of Pickpockets (watch a clip here)– a very European comedy about pickpockets who end up having to look after a young boy.

Here’s my impressions after watching about 15 nominated films.

1. All are very good. I liked some, didn’t like others, but what I didn’t like was a matter of taste and not quality.

2. All were very well produced, with high production values and good sound etc.

3. I may be wrong, but I didn’t see anything shot on lower end digital formats. Most looked like 35mm film to me, perhaps some were Super 16mm? I suspect a few were HDCam. Also, I didn’t watch every film.

6. None were let down by poor acting, photography or editing. All were excellent.

7. Personally, I feel many shorts are a tad too long. To my taste, most of what I saw here was not at all over long.

8. I didn’t watch the animated shorts of doc shorts.

9. The hard hitting social realist films, which were few, were very good and not at all self indulgent. They felt well researched and truthful, but still depressing to me.

All in all, stiff competition for any short film maker.