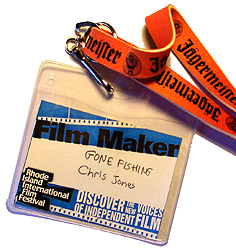 I just did a tally on film festival submissions, and the figures are quite startling.

So far we have submitted to just over 50 festivals, many of which charged a submission fee (anywhere bewteen $20 and $80 on average). As of today we have spent just over £1,600 on submission fees alone.

Add to that the cost of sending DVD screener disks (on average £3 per submission) you can see that we are closing in on nearly £2k! And that does not include the time it takes to make these submissions, which is frankly, immense. In fact it’s so time consuming that I am now having to pay Sara Morrison a small amount of money each month to handle the work load of sending, chasing, managing and co-ordinating. She had offered to do it for free, but it quickly became unmanageable and she was forced to give up some home teaching work to help with the film.

If we get into the festivals, there is then the FedEx costs of shipping prints and of course the huge costs if I, or anyone else, plans to attend and represent the film. I knew that we had spent a great deal, I was just very surprised that it was as much as it is.

Sara, who is running the festivals submissions wrote up a great article on the blog last year, for those who are interested… If you are making a short film, you really do need to consider these costs, I know I vertainly didn't think it would be that much. And sadly, if we want to really get the most out if this, we will need to submit to maybe a futher fifty, doubling the costs.

So if you know anyone who might want a copy of Gone Fishing as a gift, or if you know someone who might be interested in what we are up to, please let them know about the DVD and this blog.

The number ONE reason I encourage filmmakers to go to film festivals
Day 1 at Incubate in Tilburg
What materials do you need to enter a film festival?
Using video blogs to share your film experience... Rhode Island from the archives
How Getting Involved In A Community Film Festival Can Inspire You As A Film Maker
If You Build It They Will Come…
Have you ever loved someone, and lost someone?