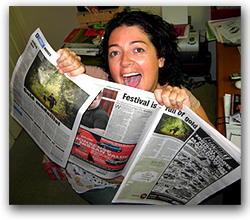 I am about to get onto a plane and risk life and limb in Gympie, Australia, where I am running a two day seminar at the Heart Of Gold Film Festival. Pictured to the right is head of PR, Angela Vogt, with two of the BIG newspaper articles she placed for the seminar and the festival (in national press too). I say risking life and limb, as during Skype chats with the girls of the festival, I have come to realise that Aussie girls know how to party, and they are threatening to show me a good time, Australian style… I don’t know if I should be terrified or thrilled! Perhaps both.

Seriously though., Angela has done a really great job, placing features in the newspapers , getting me on the phone for live radio interviews while I was in the UK, even getting TV spots. I am sure this is one of the reasons why the Heart Of Gold Film Festival is already a major international event, even though it’s a young festival.

Toni who runs it, is also very passionate about films, and I look forward to meeting her in person. We have all chatted on Skype several times, and it kind of feels like I am already part of the family.

So I hit the ground running in 29 hours time when I fly land,  then rest the following day, then do the two day masterclass. And anyone who has done that class with me knows how gruelling it can be, so the day after that, I AM SLEEPING!

More on Australia then when I get there.

Short film opens doors in LA for Brit Film Maker
Subtitles for Festivals
FREE online seminar, 'Making Web Based Comedy and Films' with the Misery Bear Team
What’s the one thing missing from your financing arsenal?
Canon 5D MkII versus Film in the real world… the result?
The 2 second film festival poll with live results... are they worth it?
Meet the film maker!
Let's all get together…