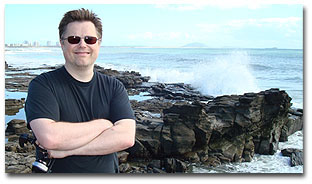 A few days ago I wrote about film sales and where they could be headed right now. To add to this, I just got a great tip from Susan Cohen, a US based film maker whose amazing short, Open Your Eyes, has played at festivals alongside Gone Fishing. We have spoken and met a few times and I have to say she is terribly nice and is always offering help and advice without asking for anything in return. Good Karma Susan! Anyway, she sent me a link to some actual real world sales for Scripts, not Films, but Scripts (in Hollywood). You can take a peek here.

OK, so landed in Australia, courtesy of Qantas, who are now my favourite airline. It was both the longest flight I have taken so far, AND the best one in terms of comfort and service. Splendid.

I was collected from the airport by G'Fisher Simon VanDerSpoel and I then embarked on an amazing press junket… More to follow when I edit the Webisode.

Really enjoying the vibe here, the seminar I am running tomorrow is sold out, the town is exactly what I would expect from a small Australian outpost in the 21st century, and everyone is very nice. Clearly, drinking, especially beer, is important here. The only way to my hotel room is through a sports bar. IN fact the hotel reception IS a sports bar!

On another note, World Sea Fishing has just run a great article on Gone Fishing, you can read here… This is an attempt to get the message of the movie out to new communities, to see if we can sell any further DVD’s.

50 Kisses selected for the Rhode Island International Film Festival 2014
We are going to the Bahamas!
How Getting Involved In A Community Film Festival Can Inspire You As A Film Maker
FREE online seminar, 'Making Web Based Comedy and Films' with the Misery Bear Team
What materials do you need to enter a film festival?
Let's all get together…
Heart Of Gold Kicks Of With AN AMAZING VIBE!