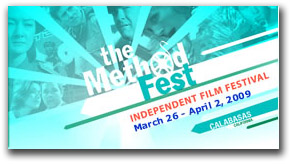 We are playing at a festival called The Method Fest in California next week. I can’t make it to all of the event as I am going to Australia for the Heart Of Gold Film Festival just north of Brisbane tonight.

One GREAT thing that has already come out of Method Fest though is an idea from one other film maker. Sky Soleil, director of a short called How My Dad Killed Dracula, emailed all the other film makers to introduce herself, show us a trailer and let us know the times of the screening etc. I know this all seems obvious to do it, but it’s very rare.

Sky has created a domino effect whereby all the film makers are now in contact, watching each others trailers, and there is even speak of a ‘short film makers’ get together to swap tips, experiences and festival insider info at a party. This kind if ‘before the festival planning’ really will make a huge difference to us all. Certainly when I get to festivals, the first day is kind of lost to just finding your feet, and in a strange way, you don’t really have much to say to other film makers until your film has played.

So this kind of networking is really helpful for everyone. Well done Sky, for starting something great!

Watch the short film that catapulted director of Blade Runner 2, Denis Villeneuve, to the ...
Subtitles for Festivals
The 2 second film festival poll with live results... are they worth it?
The number ONE reason I encourage filmmakers to go to film festivals
The top six film festivals in the world, based on my experience... and none of them are A ...
Canon 5D MkII versus Film in the real world… the result?
Gympie Girls with a Heart Of Gold
Landed in Australia… Culture SHOCK!