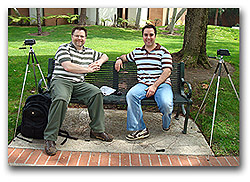 I met with film maker Alex Fazeli today, a director I have bumped into several times on the festival circuit. I met with him on the USC campus to shoot an interview for the Online Guerilla Masterclass, and we went super minimalist. We shot the interview on two cameras, with NO camera crew! This was my first crack at this and I will post the results in due course.

USC blew me away, the new Lucas and Spielberg buildings which will house the film school students, apparently cost $75m, and it shows. It’s stunning. As I was walking out of the front door, we bumped into Robert Zemeckis who was getting into his Limo – apparently he has his own wing here on campus too!

The interview with Alex was great and he said so much that we will all find very useful (I will upload when edited), but the core thing he kept coming back to was a simple truth. So simple that it’s easy to overlook. Film makers must be excellent sales people as you spend your life selling to others in almost every capacity. This really resonated with me, and it’s the factor that is so hard to teach in others, and it’s SOOOO essential for success.

His film (shot on 35mm) ‘In The Dark’, is a true story, set on the eve of Ayatollah Khomeini’s return to Iran, when a double agent, hunted by the new revolutionary government, agrees to exchange crucial information with the CIA in return for safe passage out of the country.

The top six film festivals in the world, based on my experience... and none of them are A ...
Short film opens doors in LA for Brit Film Maker
Canon 5D MkII versus Film in the real world… the result?
Day 1 at Incubate in Tilburg
The 2 second film festival poll with live results... are they worth it?
How Getting Involved In A Community Film Festival Can Inspire You As A Film Maker
I have signed with a Manager in LA
Gympie Girls with a Heart Of Gold