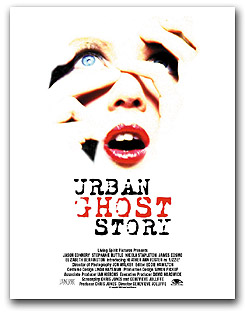 I met today with Lise Romanoff of Vision Films. Lise handles international sales for feature films and sells both White Angel and Urban Ghost Story. I went over with Genevieve to get the low down on the international market for commercial Indie films of varying budgets.

We had a great chat and met her team, all of whom seemed very energetic and professional. But this international sales and its certainly a long way from drinking capucino in a London coffee shop and discussing ‘important cinema…’ You can see just how different the International approach to sales can be from the Urban Ghost Story artwork here. Personally, I find this approach honest and more refreshing.

So here is what we gleaned from our meeting – some of the points being a little niche!

1. Family films are in at the moment. Arguably they have never been out, but broadcasters are in need of family films. If you can make a film with dogs and ponies, you are onto a winner ;-)  Here is a trailer of one of her best selling family titles right now.

2. Video and DVD is dying, if not already dead in some territories.

3. Horror is over saturated, so unless it’s exceptional, it will struggle to sell.

4. SciFi struggles on lower budgets as the effects can be a bit ‘cheesy’. Interestingly, SciFi never does well in Muslim countries (apparently for reasons of belief systems) and these are growing territories.

5. Star names, unless they are REAL stars, are less important now. Certainly C list names may cost a lot of money, may impress backers, but may not have any impact on sales.

6. People are buying back catalogue titles right now, rather than new titles, as budgets are tight.

7. Army related films are doing well, not so much war films, more action movies with soldiers, perhaps a squad behind enemy lines etc. You can see a trailer here on YouTube for one of her hot selling titles right now.

8. Comedy and romantic comedy remains a very hard sell without a name that none of us could afford anyway.

10. Emphasis is put on future proofing your product so it can sell for years, no matter what technological developments occur.

11. Lise recommends you make a part of your budget available for them to make a killer trailer and poster. She recommends this be around £7-10k. Even though you could do a poster and trailer yourself, I think the idea is that the film makers tend not to sell hard enough, or they are not targeted in their thinking.

12. Make sure there is some Amrecian component, usually an actor, or it's seen as a British film, and therefore arthouse.

13. Docs remain strong, but just because it’s a great doc, does not mean it will sell. She handles several terrific docs that are proving difficult because the subject matter does not travel well.

14. Film makers still do not consider sales. They plunge headlong into their movies ASSUMING it will sell having not met with any sales agents to discuss.

15. Rating is very important as DVD and Video has gone and TV is the only remaining reliable sales route. And TV means bad language, sex and violence should be reduced (hence the need for family programming).

I pitched a few family film ideas I had and she said, 'we could get on the phone and sell that today…' She was less optimistic about some horror and paranormal drama ideas, the sales guys saying 'The problem with paranormal drama is there is a lot of talking, people actually have to listen and pay attention…'

It's all fascinating stuff about the actual market RIGHT NOW, TODAY.

UPDATE – Carolyn McCulley wrote… Hey, Chris — a very useful list. Thanks for posting it. Can you elaborate on point two and why this is happening? Thanks!

Sure. So point 2 is… Video and DVD is dying, if not already dead in some territories.

This is a complex issue with many reasons, but by far the biggest must be piracy. It has decimated DVD industries in some countries, such as Spain and South America, and also hit hard all other countries. Not just copied DVD’s, but also online illegal downloads. It just takes one DVD somewhere on planet earth to make it onto the internet and the rest is history. Given all digital formats are insecure, it’s no wonder this happens. I am writing an article for Moviescope magazine about this in the coming weeks, so will be able to add lots more.

PPV on digital channels is so easy now, and the likes of LoveFilm / NetFlix have also impacted on the rental market. Why buy your favourite old film, rent it from NetFlix.

Personally, I also think that people are just not as interested in the ritual of renting a DVD down at Blockbuster now, or even buying it on the high street. I also think we are a bit jaded with big business fleecing us – why buy a movie on DVD, it will be on BluRay soon, and then what will be the next format.?

There is much talk of everything being on the internet and I think that many consumers feel  that buying a DVD may be investing in something that will go the way of the VHS recorder.

And hey, if I can watch on TV at home for free in HD, or even pay a PPV charge, that’s more convenient than renting or buying a DVD.

Thanks for asking Carolyn

UPDATE – I just got a great tip from Susan Cohen, a US based film maker whose amazing short, Open Your Eyes, ha splayed at festivals alongside Gone Fishing. We have spoken and met a few times and I have to say she is terribly nice and is always offering help and advice without asking for anything in return. Good Karma Susan! Anyway, she sent me a link to some actual real world sales for Scripts, not Films, but Scripts (in Hollywood). You can take a peek here.

Should you distribute your short on DVD and BluRay? Guest blog from Danny Lacey: 10 things...
Selling your movie direct on DVD...
Micro Budget Film Making Law Number 8… Get A Single Shooting Location To Fulfill Multiple ...
And it was all going so well... Or was it? Filmmakers, Screenwriters, Creatives... Are you...
Making Feature Films For No Money: How I Made My “★★★★ Intense and Tender Psychological Th...
Urban Ghost Story, the making of... And the complete soundtrack by Rupert Gregson-Williams
Do you want to go to a film festival?
I have signed with a Manager in LA