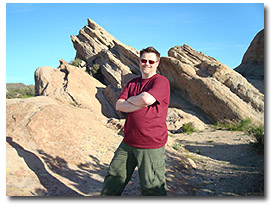 Today I went to a location just East of LA called The Vasquez Rocks. It was to film the introduction to my online seminar, and wanted a backdrop that suited the tone of the intro. I was particularly excited to go to the Vasquez Rocks as it was a heavily used location for film and TV, especially TV in the sixties and seventies. Including my favourite ever episode of Star Trek!

Yes I reverted to my geeky childhood and ran around the rocks, imagining Captain Kirk fighting the Gorn…! I really did! I even had my phaser set to stun (yes I know in that episode Captain Kirk didn't have his phaser). In fact, pretty much anyone my age remembers this episode as a classic, alongside The Trouble With Tribbles. 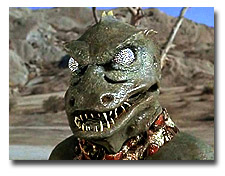 Of course I got there only to find a film crew shooting a feature film had taken over the whole area. Those darn film crews!

As soon as I got back, I Googled the Star Trek episode and discovered, astonishingly, the entire episode in high quality on YouTube (free if you watch 20 second commercials which you cannot skip over, which in of itself is a fascinating development for YouTube).

So if you want some nostalgic intergalactic fun with Captain Kirk fighting a man in green rubber suit, just click here to watch on YouTube. 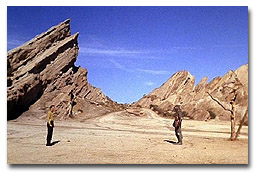 I know I enjoyed it!

Design your destiny by managing and creating your beliefs
Chasing the dream? How to lead like a crazy person
How best to be a filmmaker in 2015?
Top ten tips for filming in the Jungle
'50 Kisses' achieves a GUINNESS WORLD RECORD
White Angel 2, Kiss of Death Killer
Do you want to go to a film festival?

One Response to The Mysterious Vasquez Rocks… Beam Me Up Scotty!