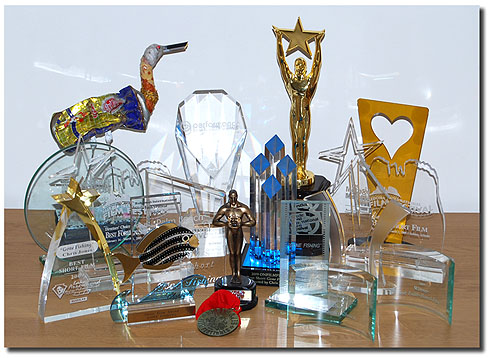 Can you believe! We have won another film festival, The Big Island Film Festival in Hawaii! The awards were on Sunday and we won the Best Foreign Short Film Award. I thought now would be a good time to take a snap shot of the vast collection of glass, perspex and bling that we have amassed on our journeys. Extraordinary isn’t it.

As for how many festivals we have entered so far? Right now it’s about a hundred and thirty, with about fifty festivals we are still waiting to hear from (to see if we have got in or not, though Sara tells me we are in about ten of those fifty). So of those eighty or so remaining festivals, we got into thirty two, and blimey, can you believe, we have twenty four awards on our bookshelf! And some of those festivals were non competitive. Goodness!

When I think back though, I still think that the Rhode Island Film Festival was one of the highlights, as was Sedona and Heart Of Gold.

And RIIFF is now open for submission for the 2009 Awards in August. Great festival! I would urge you to enter. We have some more fests coming up too – and I am particularly excited about Tokyo!