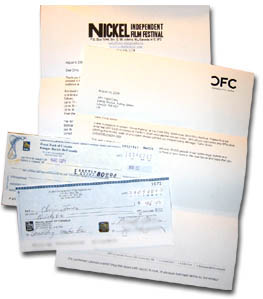 Over the last year, I have had a wide range of experiences at film festivals – some amazing, many good, and a handful, well, terrible. One thing that has sometimes struck me at some badly organized festivals is the lack of respect for a basic agreement – here is the deal, implied I might add, but a deal nonetheless (as I see it anyway).

‘I will give you my film which I worked very hard on, you will give me a great screening in return, that you work very hard to fill’

Many times I have attended a festival to have only a handful of people turn up to see a DVD projected with very bad sound. This is very disheartening. I have on occasion asked the festival directs about this, and it of course, it comes down to money. When feeling brave, I remind them that they get all the box office takings, so maybe they should work harder to fill that room? Remember, they keep all that money. If they did their job well, we should be having packed houses – I get what I want, they make some cash to cover costs and maybe even accommodate a film maker? Sadly, this is not always the case (though there are many exceptions, such as Sedona which was packed at every screening).

In the whole year I have where we have played at umpty thrumpty festivals, we have never received ANY payment for screening ‘Gone Fishing’ (nor did we expect any). And then, just like the Number 37 Bus, two cheques turn up on in the post the same day. $80 from the CFC World Film Festival and $96 from Nickel Independent Film Festival. Both also wrote very nice letters saying thank you and also committing to rewarding the film makers. So thank Ruth Lawrence (Nickel) and Eileen Arandiga (CFC), every little helps keep our boat afloat.

So, if you have a film and want to play in Canada, I recommend that you consider submitting to both of these festivals as, if you get in, you will actually make a little money back.

The debate rages on... What value is there in Art Film?
The number ONE reason I encourage filmmakers to go to film festivals
Tomorrow I Fly Out To Finland for the Tampere Film Festival, and maybe the Northern Lights
Gone Fishing at Rhode Island, the complete Webisodes...
Mankind Is No Island, Interview and Film
Interviewing the film makers… 'Dead Wood', shot for peanuts and sold to Lionsgate for hard cash
Enter… The Black Hole…