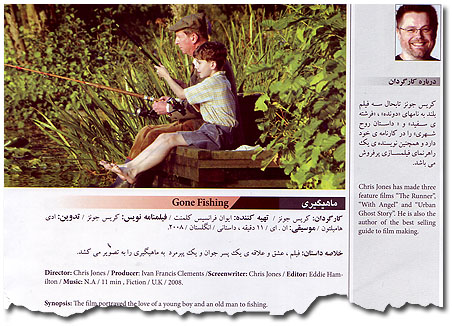 Even though we have ramped down the Gone Fishing festival push, we still, on occasion, submit the film to some festivals, especially if invited. And this week two very wonderful and very different awards arrived for us. 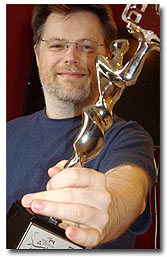 First and rather dramatically, I was summoned to the Foreign office where a grand, shiny and amazingly heavy metal award was waiting for me – it had been sent by diplomatic channels from the Roshd Film Festival in Iran where Gone Fishing had received the Silver Medal Award.

It also came with five gold pieces… though I am not sure if they are really gold… mind you, they are quite heavy…!

To win an award in a country that could so easily be viewed in the stereotypical terms we are so very used to seeing in the media, does I must admit, feel both strange and very touching. That’s a weird combination for me. I only wish I could have attended the actual festival – for me, that would have been an amazing cultural experience / cultural shock to remember – but I was advised by government types that it might not be a good idea. 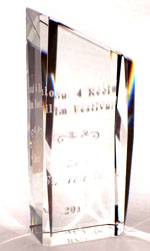 On the other side of the planet, and at the very same time, I got a message from Rocky McKoy, organiser of the Christian Soul 4 Reel Film festival (Maryland, Eastern USA), that we had also won best film AND the audience award!

He sent us a very small but actually, very beautiful glass award, alongside a lovely handwritten note (something that is actually a first to my memory, so good on you Rocky).

As I could not attend, I had recorded a short video to accept the award, and it seems, that video postcard elevated events for all present. Having attended so many festivals where award after award go straight back onto the table on the stage, as no film maker is present to accept, I feel duty bound to make an effort by filming a short thank you. 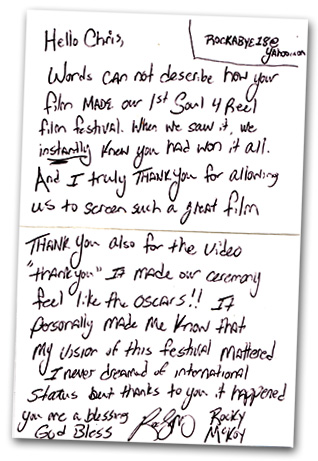 To discover that our film, with its very simple message, can find a home in both of these countries, albeit in film festivals, does blow my mind, and is a real testament to the power of cinema. Movies connect and bind people through a language that fundamentally, needs no words, and yet these same movies can still can speak powerfully to the 'universal' heart, mind and soul.

I am constantly amazed at how people react to the film, how it moves them and how we just keep on winning awards!

Meet The Nativity Wins 'Best Festival' Film at 22nd Jerusalem Awards at BAFTA
Stunt Co-ordinator gets onboard
Watch the short film that catapulted director of Blade Runner 2, Denis Villeneuve, to the ...
Lessons Learned On A DSLR Drama Shoot... Day 2 Wraps
50 Kisses HUGE Box Office Success... The numbers are in!
What's the secret to getting through a huge script on limited resources?
Want to know how ‘Shifty’ got made? Read the first proposal used to secure deal with Film London!
Film Distribution In 2010, a Guerilla Film Workshop