By Chris Jones on May 1, 2010 in Books, Guerilla Film Makers Handbooks 0 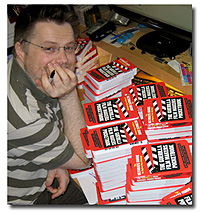 Come to our book launch and meet a whole host of film making experts and professionals, network with them, pick their brains… and help get your next amazing poject made…! (see list below of confirmed experts attending – more to follow).

OK, the new shiny tiny Guerilla Film Makers Pocketbooks have arrived from LA, which means we can now start shipping them out. So those of you who are waiting for them to arrive, thanks for your patience. It also means we are now all guns blazing for next weeks Book Launch in central London (The Phoenix Artists Club, 1 Phoenix St., WC1H ODT on evening of May 6th 2010 – tickets £15).

Can't make the party still want the book? Links at bottom of this post.

The launch  had already promised to be a great event, but it’s GETTING BETTER every day… and now half the tickets are sold. So if you are sitting on the fence, now is the time to take action!

Aside from your own signed and numbered copy of the new Guerilla Film Makers Pocketbook, at the launch party you will also get a £15 Raindance Training voucher for any of their courses and events. At the party there will be a whole host of film makers, film crafts folk and production experts who are interviewed in this, or past editions, of the books. They will be mingling and ready for YOUR questions. They will all be sporting name badges too, so you can see exactly who they are, making the networking experience that bit easier. There is a list below of experts in attendance (more will be confirmed over the coming days).

We will also be holding a short Q & A seminar with the film makers who have made the sensational new thriller ‘SUS’. 100% British, made on a VERY low budget and written by Barry Keefe who also wrote on of the UKs GREATEST films ever, ‘The Long Good Friday’. I am delighted as one of the producers of ‘SUS’ is Mark Sutherland who also worked on my second feature film ‘White Angel’ in the art department back in 1992! Even back then he had ambitions to produce, and his amazing story is proof that success is in large part about focus and stamina. Mark you made it pal! Well done! I am sure he will have lots of inspirational stories to share with us all on the night. I can’t wait.

To end the evening, we plan a chat with DSLR guru Philip Bloom. Without doubt the advent of HD-DSLR cameras have changed the face of indie film making forever, and Philip is without doubt the planets foremost authority on the tools, technology, craft and art. We are lucky to have him attend. In fact we will be lucky indeed as he is on a shoot and can only get away at 7pm, so we all need to cross our fingers collectively to help him get to us on time!

‘SUS’ goes on theatrical release on the 7th May.

Every one of our past launch parties have been great events, the pic here is from the UK GFMH launch party when the demand for the new books got a little out of hand… 😉

Ivan Clements, Producer and Financier (Sparta Film Fund) – Since producing his first three feature films and of course, Gone Fishing with Chris, Ivan has moved into film financing and recently launched a film fund for film makers where the fund can secure up to 65% of the budget for a film, leaving the film makers to find the remaining 35%.

Ross Stuart Boyask, Director, ‘Ten Dead Men’ – Ross has directed two successful micro-budget action films, "Left For Dead" and "Ten Dead Men", which has now been released in more than 20 countries. Ross is currently wrapping production on the martial arts fantasy feature "Warrioress". Ross also works as Director of Acquisitions for Stealth Media Group, to acquire films for distribution in the UK and for International sales, and regularly attends international film festivals and markets including Cannes, MIP-TV, MIP-Com and AFM.

Jude Poyer, Stuntman/stunt coordinator – Jude has worked professionally as an actor and stuntman for over a decade. For eight years he was based in Hong Kong, where he worked with such recognised action film stars as Jackie Chan, Jet Li, Sammo Hung and Jean Claude Van Damme as well as respected directors including Tsui Hark, Andrew Lau and Tarsem Singh. Now based back in London, Jude works internationally, putting what he learned in the East to use in the West.

Dav
id Wilkinson, Distributor, Guerilla Films – David has distributed independent British feature films for nearly 15 years, working with many indie film makers on films with budgets as diverse as £20k and $15m. He has appeared in several editions of The Guerilla Film Makers books and is a great champion of indie film makers.

Catherine Arton, Casting Director – Catherine has been casting for the last ten years and has worked with Chris on both ‘Urban Ghost Story’ and ‘Gone Fishing’. She is always on the look out for new talent both in front of the camera as we all as behind the camera. Catherine appeared in the last edition of the Guerilla Film Makers Handbook.

Judy Goldberg, Producer and Writer – Judy joined team Living Spirit last year after she returned to London. Previsouly Judy worked for Impact Pictures in LA on film such as the Resident Evil franchise. She is also co-hosts the Production Office with Chris and appears in the pocketbook.

Bernard O’Reilly, Sound Designer – Bernard has had over a decades experience working on feature film sound, and during his time at Videosonics, worked on productions as diverse as ‘Aliens v Predator’ and ‘Mr Bean’. Since leaving Videosonics, Bernard has worked on ‘Lesbian Vampire Killers’ and ‘Clash Of The Titans’. He is interviewed in the Guerilla Film Makers Pocketbook.

Mark Talbot Butler, Editor – Mark edited the very first feature film made by the Living Spirit team, the now legendary ‘The Runner’. Since then he has moved between film and TV, and most recently cut ‘EXAM’ for Stuart Hazeldine (on which Chris Jones was a Associate Producer). He is clearly a Star Wars fan!

Melanie Light, Production Designer – Melanie has worked in the art department on countless low budget films and is a mistress of making a little go a long long way. A true guerilla film maker with the war stories to prove it. Melanie is interviewed in the Guerilla Film Makers Pocketbook.

Julian Richards, International Sales Agent, Jinga Films – Julian is a veteran Indie film producer and director who moved into film sales five years ago. He moved into film sales with his fourth feature film, ‘The Last Horror Film’ and never looked back. Jinga works with film makers whose films budgets range from £20k to $4m.

Simon Reglar, Editor – After making a career change from that of a professional dancer in the all male ‘Swan Lake’, Simon pursued a life long cream of working in film and became an editor. Quickly finding a foot-hole in quality television, Simons most recent credits include ‘The Royale Family’ and he is currently editing ‘Merlin’ for the BBC.

We will be updating this list over the coming days as more Expert Film Makers commit to attending.

If you cannot make the event but still want a copy of the first 200 books, signed by all three authors, you can get them below.

And if you live in the USA, get 'em direct and signed by us all from Gen and Andrew in Hollywood. Use the button below…

Looking forward to seeing you at the book launch!

And it was all going so well... Or was it? Filmmakers, Screenwriters, Creatives... Are you...
Everything you need to make a feature film for cinema release
Joe Eszterhas’ ‘The Devil’s Guide to Hollywood: The Screenwriter as God’
Congratulations to the 25 Selected Authors in our Father Christmas Bedtime Stories Book
Get a job in Hollywood... detailed insight into the dream factory
Read The Script, Meet The Film Maker, Watch the movie…* ‘Death At A Funeral’…
Distribution in 2010, a film makers treasure chest of tips, tricks, strategies and new relationships