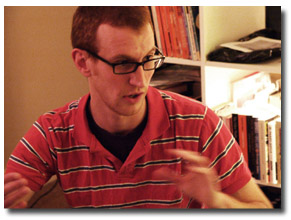 I was recently contacted by a film maker who was doing something that was rather amazing… making a feature film in 72 hours! I asked him to share his thoughts  and here they are…

I met with Chris Jones in the spring of 2006 for his help with my Film Studies thesis about ‘The Impact of Digital Technology upon the Filmmaking Production Process’. Once my academic work was handed in, I became eager to put some of my learning into practice with a few friends from my course. The result was the 72 Hour Movie.

The premise of the project is quite simple; a team of filmmakers have to shoot, edit and then screen a feature-length movie in 72 consecutive hours. We actually achieved the feat to mixed effect when we made ‘Watching & Waiting’ in 2008, which was shot as part of the Galway Film Fleadh in Ireland.  There was an air of uncertainty around the project about whether it was achievable, which meant we didn’t promote ourselves to heavily. However, the project got the attention of the Melbourne International Film Festival (MIFF) in Australia, and when they invited us to repeat the feat at their festival this summer, we decided to go for it and improve upon our first attempt.

The movie we are making for MIFF will be called ‘The Ballad of Des & Mo’, and all pre-production (script, casting etc.) is sorted in advance. But once we press ‘record’ for the first time on Wednesday 4th August, we’ll have just three days to complete the whole thing!

‘Why do this?’ I hear you ask. Well, I don’t have a digital evangelical point to prove if I am honest. I am fascinated by the organisational structures that digital can offer to filmmakers, and I enjoy experimenting with alternative workflows and roles within filmmaking. I am not convinced that trying to use new technologies with the antiquated organisational structures of a struggling industry is effective. And it seems that festival organisers agree that this is a valid point for us to explore at their event.

I ask myself why a director is a director and a producer is a producer. Not in a philosophical chin-rubbing way, but in a pragmatic way. Specialist roles suited the factory-like processes of the studio system, but on a project-by-project basis I believe I am wearing many hats – director, producer, editor and many more.  Even the equipment is not specialist anymore because great cameras are affordable to many. I see loads of people with a 7D or a 550. Today people have an exposure to cheap digital filmmaking technologies in a far greater way than in the days when it really would take years and expense to perfect your ‘craft’ on celluloid.

The 72 Hour Movie does have a sub-division of skills otherwise it would be chaos. But a large part of the crew is a versatile team of generalists, who are capable of turning their hands to a variety of tasks instead of standing around when their own job role is not needed. More importantly there is horizontal communication across the process, where anyone can talk to anyone else without the bottlenecks of a ‘chain of command’ vertical system. It is this transparency and flexibility that helps us achieve our task.

I don’t profess that this is the future of filmmaking or that this is how we should work. I am engaged in a learning process about an industrial art form that I love. It saddens me to find a lot of negative language surrounding film, constantly geared towards loss and uncertainty. We don’t need filmmakers attacking other filmmakers in the ‘blogosphere’ over differences in ideology. Let our movies do the talking. My ambition is to make the 72 Hour Movie project into an inspirational and empowering experience, with positives to be taken from the downsides.

If you are interested and want to find out more, visit www.72hourmovie.com. You can find me there!

Interesting. I have asked James to keep us in the loop of how it all goes.

Exclusive Interview with Christopher Nolan and Emma Thomas from our Guerilla Film Makers A...
After years working in the real world finding my life rushing past me faster and faster, i...
Demystifying Distribution: Real World New Distro Case Study Strategy and Tactics
How You Can Make Money With Your No-to-Lo Micro-Budget Film
Networking With Film Makers… how do you do it?
Dragons, Reapers and Guerilla Filmmaking: Turning Writer to Director With My First Short ‘...
Gone Fishing NOW ON iTunes!
Writing is re-writing… Rocketboy is dusted off and prepped for relaunch!