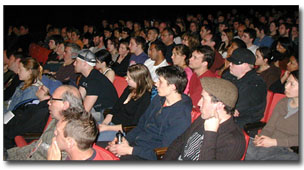 Those of you who followed my Gone Fishing journey will know that last year I went to about 30 festivals around the world, and documented the whole process on the blog. I also created a spreadsheet and some very interesting data analysis (you can download the spreadsheet here and use it for your festival campaign).

Over the years, I have been asked by several festivals to blog about their events, but I have resisted as there has not yet been a personal connection – that’s until now. This year I am the head of the jury at the London based Super Shorts film festival. WOW! The organisers just sent out press releases (below).

So finally, I guess I will find out what it’s like on the other side of the process, and I am looking forward to it hugely! Here's their blurb…

In the last seven years Super Shorts has awarded over £35,000 worth of prizes to talented filmmakers and scriptwriters.  In that time we've shown around 1,000 incredible short films, from slick 35mm shorts to weird and wonderful experimental films. We've held over 120 events, including seminars, panel discussions and workshops.

This year is set to be better than ever and we are continuing our tradition of providing cash prizes for the top films and scripts.

Entries Now Open – We are now accepting films under 20 minutes and short scripts under 20 pages.  Filmmakers and writers can either apply at Withoutabox (www.withoutabox.com/login/6736) or via a printed submission (details at www.supershorts.org).

Short Film Competition – All films under 20 minutes are eligible, including live action, documentary and animation with fourteen award categories including Best Direction, Editing, Script, Sound, Cinematography and Producers' Award. This year sees the addition of the 'Low Budget Award' which celebrates the film which achieves the most on a limited budget.  The top prize is the Grand Prix which has a £1,000 cash prize .

Short Script Competition – Open to all scripts under 20 pages of any genre and with a top prize of £500 cash. All shortlisted scripts will receive feedback and as our Festival Jury will be made up of industry professionals we hope that this competition will be useful in getting your script read by more people. Submitted scripts will remain private at all times everyone involved will be required to sign a non-disclosure agreement to ensure your script remains protected.

50 Kisses selected for the Rhode Island International Film Festival 2014
The number ONE reason I encourage filmmakers to go to film festivals
Day 1 at Incubate in Tilburg
Short film opens doors in LA for Brit Film Maker
Short Films on the film festival circuit, a view from one film maker... Chasing Cotards
Watch the short film that catapulted director of Blade Runner 2, Denis Villeneuve, to the ...
What does 'The Stage' say about the new Guerilla Film Makers Pocketbook?
Cutting Dialogue from your screenplay, a masterclass in minimalism for Screenwriters