What I have found is that when people read a script, each person pictures it through the of their own experience and imagination. No matter how clear the writing, everyone has at best a slightly different version of the story in mind (at worst, wildly differing versions!).

And so by moving from script to storyboard, everyone shifts from an imagined reality (where there is always enough time, money and light to get it right) into a more pragmatic world of budgets, bad weather and parking wardens!

For me, storyboarding is the process whereby I get to make the film in the safety of my own mind. It’s also a time when I can face those practical ‘shooting film’ demons too. And so I always approach it with the same mantra… ‘How can I tell the most with the least?’

It’s a kind of visual haiku.

It’s about getting to the point as fast as I can, and getting out as soon as that point has been made.

On a process level though, it goes through a number of steps.

First is the script, which of course goes back and forth until everyone is happy.

Here is one scene from the film I am shooting in two weeks time.

CU of GEMMA’S iPhone which receives a text that reads ‘Morning gorgeous, want to get married today?’ GEMMA grabs the phone and the engagement ring.

Gemma reads the text and looks at the ring., She grins and texts back quickly, hits send, and dives back under the covers giggling like a school girl.

OK, from that, I now draw up my pretty rough thumbnails (pictured below). 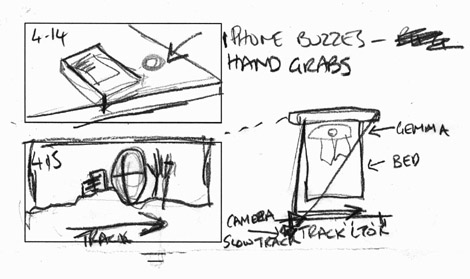 In many instances, my boards would be good enough. But as this is a budgeted production, and because it helps the whole process if the client sees the boards, we have had a storyboard artist come in, the very talented Rachel Garlick (www.thestoryboardartist.co.uk).

Rachel is sat right next to me now, taking my rough thumbnails and redrawing them. The advantage of doing this, scene by scene, is that I get to re-imagine my thumbnails once again, refining, dropping shots I don’t need, and distilling the process. 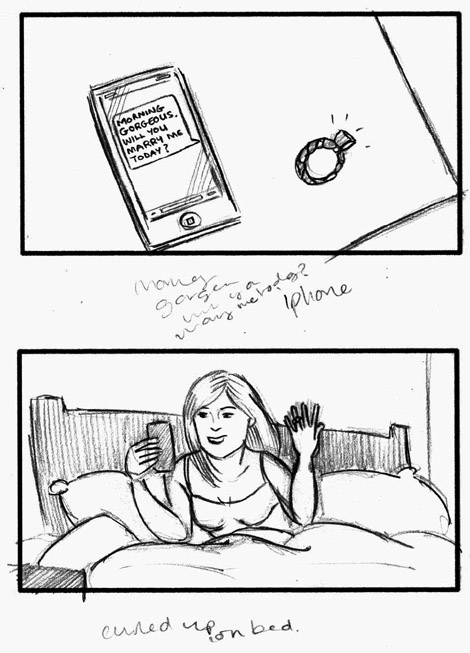 Rachels boards are then scanned and I insert them into a program I used on Gone Fishing called SpringBoard – a simple tool that helps me organise my boards and script notes. It is NOT a storyboard drawing program, more a storyboard management tool. I am sure there are more sophisticated tools out there, but I find that hand drawn boards are SO much more useful than computer generated ones. 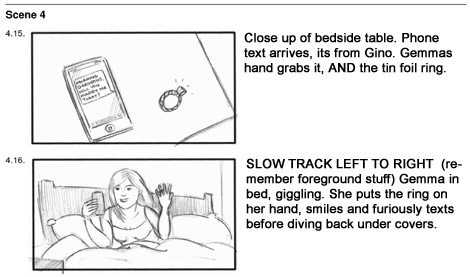 Perhaps it is because working with an artist is the first step in creative collaboration process? I find that working alone with a computer program can often serve to isolate. I just know I find the process of working with other talented people raises my game too.

Once the boards are inserted into Springboard, I can add notes to each frame which I keep as detailed as I can, so that I don’t forget information when on set (especially stuff that happens at the head and tails of shots, action that can be SO useful in the edit but is never mentioned in the script).

One other thing to consider. Storyboarding and shot listing is a lot like screenwriting. You can only do so much before you hit a kind of blur, and the mere fact that I am writing this blog entry now, tells me that I have his said moment.

Let’s see how this scene evolves over the coming weeks of the shoot!

The phone rang, and from that moment, everything changed... PART 2
How to best use library music for your film – top 8 pitfalls to avoid
Shooting With Drones: Ten tips for filming astounding footage on a shoestring
Micro Budget Film Making Law Number 8… Get A Single Shooting Location To Fulfill Multiple ...
How Filmmakers Consistently Climb Mount Impossible... Four strategies to get you on set

art, how to, Script, storyboard, Tips