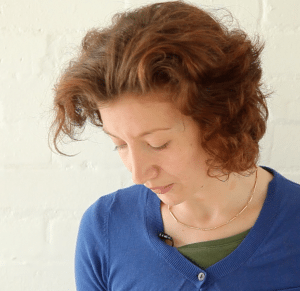 As a suburban-dwelling aspirational teenager, with dreams of making it big in film, one of the bits of advice I hated hearing the most was, “It’s not what you know, it’s who you know.”

WHAT I knew was based on mainstream Hollywood film. I didn’t know ANYONE, as I was living in Northampton, where being well-connected consisted of vaguely knowing the owner of my local nightclub.

Skip forward a few years, and being a Board Member of Euroscript means I’ve become a regular at the annual London Screenwriters Festival.  I also co-founded the UnderWire Film Festival, and now know more film folk than bartenders. Not only that, after a degree in film, I’ve learned there’s an awful lot more to Film than pure indulgent entertainment.

Having written short film scripts for friends and independent directors for a few years, I have always enjoyed how achievable this format makes filmmaking. Short films afford filmmakers the freedoms that big budgets deem too risky, making this an exciting form to write for, with a chance to tell stories that are rarely told.

On hearing about 50 Kisses through the LSF connection, I was immediately intrigued and excited by the challenge: just two pages of script, to tell a good story that had at least one kiss in it somewhere. Coupled with Chris Jones’s procrastination-beating admonishment that any writers who didn’t enter couldn’t really be serious about being in the industry, entering was inevitable. And best of all, as it was such a short piece, I wasn’t going to feel like shooting myself in the face if my script didn’t get picked! 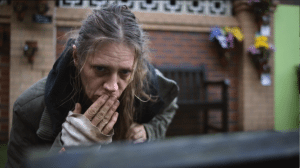 Before submitting “Other People’s Kisses”, I asked my actor/ filmmaker friend Emma Croft to take a look at it. I was delighted she liked the script so much, but even more pleased that she immediately understood the lead character, talking in-depth about how Marianne should be played, how she had come across women Marianne reminded her of, and most importantly, about the subtle underlying backstory that causes her to come to the aid of a stranger.

With her exceptional professional acting experience, it might seem crazy that this was the first serious conversation Emma and I had about filmmaking: but of course all freelancers are multi-skilled, and she has been my favourite yoga teacher for the past 5 years!  It was only because of 50 Kisses that I realised I had to take this friendship beyond repeated Triangle Poses, and work with her on a film project.  Whilst it was extremely fortunate that Emma was indeed cast as Marianne by Simon Foster who directed “Other People’s Kisses” for 50 Kisses, this also proved to us how aligned our ambitions, interests and reasons for filmmaking are.

“Honest Lies” is adapted from an original short story written by a woman previously involved in prostitution who attends a regular writing workshop I run at Eaves for Women. All of the women in this group have torn every stereotype about prostitutes from my brain. By virtue of being a feminist, I was already aware of some of the horrifying facts about the conditions these women have lived through, but meeting these extraordinary people, seeing their strength, integrity, determination, humility and generosity overwhelms any statistics.  Having an opportunity to provide them with a respectful and creative space is the thing I am proudest of in my life.

In December, the writer of Honest Lies presented me with the first draft of her story, and immediately I imagined it as a short film. The premise is perfect for the art-form: the meeting between a prostitute and the wife of a client. Immediately the conflict possibilities are complex and compelling; the stakes for all involved are high; and there’s a simplicity to the status of each of the lead characters that doesn’t require unwieldy exposition.  After working with the writer on re-drafting the short story to a standard where it is certainly worthy of winning a few short story competitions (this didn’t take long – she is excellent!) I tentatively broached my proposal of adapting it for the screen.

At the same time, Emma and I had been talking through ideas of films we want to work on together – some features, some shorts. But with life getting in the way, and nothing gaining enough momentum to take us beyond ideas stage, we were comfortably whiling away time as other projects took our focus.  That changed once I had permission to adapt the story for the screen, as I knew instinctively that I didn’t just want Emma to play the lead, I wanted her to direct as well. Her insight into the characters I write is extraordinary, and as an experimental filmmaker with an inventive and brutally truthful aesthetic to her vision, her creativity excites me.

Not only are we aiming to make a powerful film that will move audiences, we are giving voice through this story to those who are otherwise ignored, insulted, and abused.  Public screenings of this film will provide an opportunity to call for support services to be provided – or in the many cases of organisations whose funding has been cut – for services to be reinstated.

We have carefully cherry-picked an amazing team of filmmakers from friends, family, other productions, and of course UnderWire, and this passionate team are working for the bare minimum to help us stay within a modest budget of £2K.  Everyone else I’ve ever met is being petitioned to pledge whatever they can to our Kickstarter campaign http://www.kickstarter.com/projects/19446085/honest-lies !

Without a doubt I have learned the truth of the sage advice I once despised: it really is all about who you know!  (Tips I’ve gained on how to meet “them” – get out there, do what you love, be fearless, be kind, be humble, and don’t give up!)

http://www.kickstarter.com/projects/19446085/honest-lies
https://www.facebook.com/honestliesfilm
G
xx
Good luck! Gabriella will share her ongoing journey so other filmmakers and writers can learn from her experiences too.

The four principles every creative needs to use when asking for help for their project: Wh...
Successful Crowdfunding Old Skool: Raise money for your film by posting letters through pe...
Crowdfunding on BBC news
How To Crowd Source Your Movie Poster Design... run a competition!
Are you breaking the law by running a Crowdfunding campaign and not declaring your income?
Self Distribution for UK Filmmakers – what are the two KEY relationships you MUST nail?
Beware of putting your actors next to a wall… it could kill the aesthetics of your film