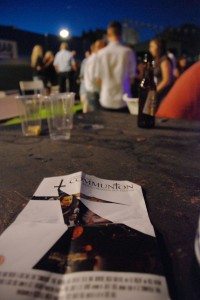 Last week, filmmaker Greg Hall laid out his plans for his own London theatrical release for his micro budget movie ‘Communion’ (blog here). He is halfway through and I promised I would share his experiences, so here they are…

On the first night we sold out!

We are halfway through our London cinematic run. So far it has been an exhilarating feeling screening the film to the public. We are running the venue ourselves which has been tiring but the upside is that we have had a direct relationship with our audience who have been really enjoying the experience.

On the opening night we had over a hundred people, roughly forty on the second and third nights, then Sunday was the quietest (as expected with just over twenty). 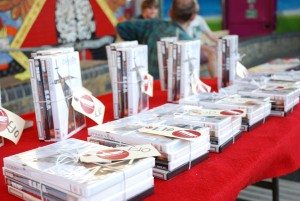 We have been also selling DVD Packs of Communion and our back catalogue (which is Four DVD’s for £10), plus we have had lots of sign ups to our newsletter.

The response to the film has been wonderful, which has been pleasing as a filmmaker, knowing it has struck a chord with the audience. Also people seem to be really engaged with what we are doing, taking control of our own destinies. The venue has also added to the unique independent experience as it is cut into the London Westway Bridge, directly on the thriving Portobello Road Market. It’s built with recycled parts from across the world and decorated by renowned street artist Blek Le Rat. 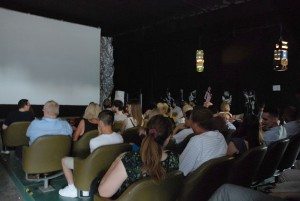 The venue hire breaks down as £40 per night for the caretaker, plus a £100 overall admin fee – so for the entire eight nights run, it’s £420. We get to keep all box office and DVD sales revenue. It’s quite literally direct artist-to-audience!

Tickets can be purchased for £5 from http://www.portobellopopup.com or £6 on the door and we have just a few screenings left now (August 7th, 8th, 9th and 10th). It would be great to see other filmmakers there, so we can share our experiences.

Thanks Greg, and what a terrific venue! Do report back on the final stats.

Top Seven Tips To Crowdsourcing from Iron Sky creator Timo Vuorensola
Movie Blueprint New Cover Quotes!
Watch a truly innovative short film that will open doors for filmmakers
HMV and Blockbuster deserved to fail
Top Ten Tips For Making Shorts from GFilm Alum Lee Greenhough
Are you a digital native or a digital immigrant?
So you have written GREAT dialogue… here’s what actors and a director can REALLY do with it
Watch extraordinary documentary about the making of arguably the greatest movie ever made: Jaws