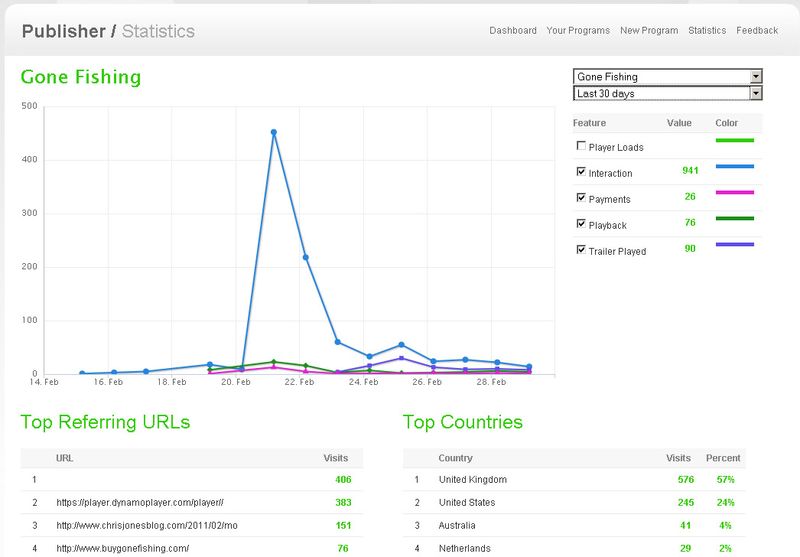 So Gone Fishing has been available for one week on DynamoPlayer (click on stats image to the right for a bigger view).

I thought I would share some of the comments that I have received via blog, email and other sites.

On my blog and after the first post on Dynamoplayer last Monday, Mike Barnes kicked off with…

‘a couple of years ago my feature film was totally ripped off and exploited by a sales agent in LA leaving me exhausted and heartbroken.’

I really understand how you feel Mike, and this why both you and I see the potential in DynamoPlayer. The ability to sell a film without interference from anyone else is why I feel Dynamo IS a Gamechanger.

‘now I can see the whole process from start to finish which is really exciting!’

‘the taster is a fantastic idea as the risk of 'will I waste my money on this?' is dramatically reduced by getting a feel for the piece.’

I agree and believe that IF you can get people to watch the first ten minutes of your film, and IF they are hooked, when those ten minutes are up, they have four options…

IF you are offering a solution that is both cheap and immediate, you should be able to close at least some deals. But it ALL begins with a NEED to watch your film.

In particular regard to feature length narrative and documentary films, once you get your customer to your site, it’s no longer about your trailer, your poster, your cast etc… Now it’s all about the first ten minutes of your film being SO good that, if a visitor watches it, they are compelled to buy or rent right there and then.

So If your film IS great, you are in good shape.

‘there’s www.videolla.com, who seem the cheapest – they charge 10% plus 10 cents per sale plus $5 a month. There's a couple of British ones – www.invideous.com – they charge 10% as well, but you need to host the video yourself and install their plugin around the video player.  www.distrify.com launched at Berlin and like Dynamo,  they also charge 30% and host the video.’

Where I believe we are headed is integration across all platforms and integration into the living room.

‘the real game changer will be when a high quality, user friendly product (Dynamo player maybe) is available on a ubiquitous set-top box. Make the movie available where people want to watch them. It's why the iTunes market took off (songs available RIGHT on the player) and why the e-book market is flying (books available RIGHT on the reader). Make a dedicated Dynamo player Market app for every connected Blu-ray player, Roku, TV, iPad out there and let my indie film compete at $.99 in the VOD market against studio films that are priced at $3.99 or higher. That would be a game changer. At this point it's just another good tool in an overcrowded, unorganized on-line video market.’

Scottish Film Maker David Baker also blogged about this with his usual passion. You can read his full post here, but here are some highlights…

‘What do a lot of DIY micro budget filmmakers do? We make a small movie, don't spend much on marketing, and then we expect to monetise right away! Completely ignoring the fact that we are in the same arena as $200m movies!

Through all these comments and reading between the lines, what I am seeing is this.

The question then becomes, how can you create such a powerful NEED to watch your film and then SERVE that need in a way in which the customer feels happy?

In deciding IF you should bank on a successful online sales campaign for your film, consider these steps…

1. Do you know who your audience is?
2. Can you get that audience to your site somehow?
3. Can you get them interested with your artwork, concept, cast, social proof etc? (and don’t underestimate how long they will give you, I suggest between 2 and 5 seconds on your site before they decide to stay or hit the back button).
4. Can you get them to press the play button to watch the preview?
5. Is what they see SO COMPELLING they MUST pay for it and watch it now?

If you fail at any of these steps, you are going to be fighting hard to make any meaningful sales / rentals. In that instance, releasing your film free and building a fanbase makes a lot of sense.

I am reminded that there is a whole mountain of stuff out there and my customers (film renters / buyers) have very limited time and budget. I need to resepct that. The world does NOT owe me an audience, I need to
earn it.

The internet has been built on ‘free’ – I’m not advocating that model but I think it’s too far along in one direction. If you talk to the generation who grew up always online they can’t even conceive of paying for things like content.

Add to this the fundamentally uncommercial nature of shorts that has always existed and I can’t see how anything will change.

The more I speak with the generation below mine the more I think the world is going through a silent cultural revolution on an epic scale. It’s not the first time this has happened – look at the changes between the generation of parents and of kids in the late 1950’s. The parents had fought in the wars, known hard times and were just grateful for a boring life. The younger generation wanted fun and felt very out of step with the parents before them. I think the internet is a similar device whereby if you’ve always grown up with it you see the world and life in a fundamentally different way.  It’s beyond whether you pay for something but more about what your values are and what you proscribe ‘worth’ to.'

While I can still only see potential with DynamoPlayer as part of my online sales arsenal I do need to ask tough questions.

If I am to use DynamoPlayer for a new film, a new venture, I will need to keep asking myself, why does anyone care about my film enough to pay? I must be able to answer this with honesty and integrity in order to make the choice between giving the film away free (maybe ad supported) or attempting a business that is built on revenue from a DIY ‘rental’ or ‘buy now’ model.

Please add to the debate with your thougths below…

PS – ‘Gone Fishing’ is also available to rent on Facebook now, BIG thanks to MikeyB who helped get it all working. He has a tutorial here.

After years working in the real world finding my life rushing past me faster and faster, i...
Modern Technology on Modern Man for Virgin Media Shorts
Gone Fishing Update
Short Films on the film festival circuit, a view from one film maker... Chasing Cotards
The complete guide to UK film distribution for indie filmmakers
My First Visit To The Biggest Short Film Festival and Market In The World, Clermont Ferrand with Mazin Power
How to rent and stream your film from Facebook… SELL YOUR FILM DIRECTLY ON FACEBOOK

4 Responses to Why Does Anyone NEED To Watch Your Film? DynamoPlayer After One Week… Thoughts, opinions and feedback…