By Chris Jones on November 9, 2013 in Actors, Screenwriters Festival 0 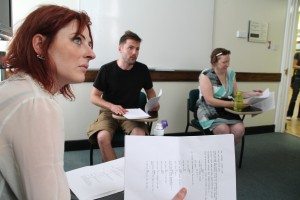 This year at the London Screenwriters Festival we ran a new initiative called The Actors Table Read.

The idea was to take a sequence of three to five pages and workshop it with actors, a director and the writer.

We ran nearly 100 sessions and the feedback was actually better than five out of five because SO MANY writers give it ten out of five or five plus plus plus! Yes the maths is a bit ‘creative’ there, but that’s also I think the tone of the event! It’s possibly the most successful event we have ever run!

Why so successful? Something extraordinary happens when a screenwriter collaborates with other professional creatives. Something unexpected manifests. Something exhilarating occurs, and it stays with everyone beyond the session.

In the feedback we asked what writers got from the session… Elizabeth Swan kind of summarised the tone of the feedback, both in the room and on paper when asked ‘What did you like about the session?’ and she answered ‘Just everything’.

After analysis, we found common experiences which I have summarised so that you can learn from their experience too. Overwhelmingly it was a few simple messages repeated over and over…

You can be sure the Actors Table Read will be back next year at the London Screenwriters Festival, only bigger! You can get your pass now at the Early Biord rate of £260 HERE

The power of disconnecting from reality to reconnect with the dream
Want great actors for your film? Write a script with a female lead
What an actor can really bring to your written words… The power of silence
What did our delegates say about LSF 2012?
How to get the MOST from the London Screenwriters' Festival: A Delegate View
The FIVE reasons your career is held back… and how to fix it
Luke Ryan: Scriptchat #LondonSWF
Top 14 tips for getting KILLER stills that will help sell your film