So why run a live event when we can connect so rapidly over the internet?

1. Because the internet is noisy
Online, it’s now harder than ever to get your message heard, especially as everyone and their brother/sister is running a crowdfunding campaign.

2. Because people will meet you IN PERSON!
People like to help people they know and like, so meet them face to face. Even if they have already contributed, they are likely to give even more in those final few hours of your campaign if they know you as a human and not just a Twitter handle. 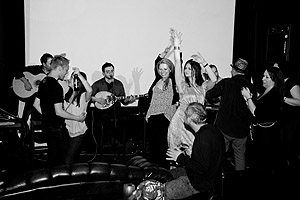 3. Because you can show them a good time
People enjoy going out and having fun, meeting new and interesting people and feeling CONNECTED. A live event delivers on all these AND proves you will go the extra mile to deliver on your crowdfunding promises.

4. Because people bring friends
It’s one thing being forwarded and email about a crowdfunding campaign for a film being made by a friend of your friend. It’s an entirely different thing shaking their hand, looking them in the eye and feeling their passion.

5. Because not everyone mainlines social media
Yes believe it or not, there are people who do not use Twitter and Facebook. Seriously, it’s true. ;0) When I run events I often ask how many people actively use social media. It’s usually less than half the audience. And in some groups, that number could plummet to under 10%.

6. Because they will share their evening via social media
Great photos will be taken of people having fun. Tweets will be sent and Facebook status updates made. All in the name of YOUR project. That will create a social media spike. 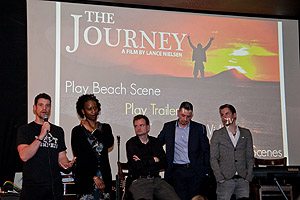 7. Because not everyone trusts crowdfunding
Many people think crowdfunding is some kind of internet scam – you can see why. Meeting you will put a face on the proposition. Meeting other people in a social environment will also offer security that what you are doing is not some clever ‘con job’.

8. Because you can take cash during the live event
Have a collection tin for cash – if it’s physically easy for people to give, you’d be amazed how much they will contribute, especially if they are having a good time and they can feel your passion for your project.

9. Because you can target communities that enjoy getting together
We all want to belong and to feel connected. Your story may well have a central group or community in the narrative – invite people from that community and deliver a great night in line with their expectations.

10. Because your competition isn’t doing this
So many crowdfunders refuse to leave their keyboards, believing the internet is the ONLY place for crowdfunding. A central component of any successful endeavour is to try something that others are NOT trying, and then to push further. 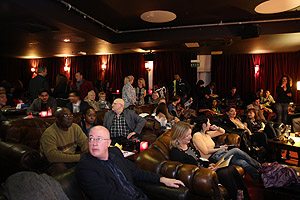 Lance also added a bunch of points to consider, based on his experience at his event last weekend…

Cost – Many venues offer a free hire against a minimum bar spend (you put a deposit down which you get back if they sell more than say, £1,000 on drinks).

Capacity – How many people are you expecting? Be realistic. Don’t book somewhere too large unless you’re sure you can fill it. But equally, make sure you don’t need to turn people away. This is a difficult guess/balancing act.

Ambience – Does the style and the type of venue reflect the sort of mood and atmosphere you want to create for your event? For instance, if your Film is a London Gangster film then a sleazy pub may well be what is required.

Technical Specs – If you’re planning on showing film clips or appeal videos then make sure they have the system that works for you and for god’s sake go and check it before the event. Ask who will deal with it on the night if it goes wrong (and it will).

Date – Once you have your venue, you need to set your date, don’t change or cancel it unless you absolutely have to. You should have at least four weeks lead time, ideally three months. 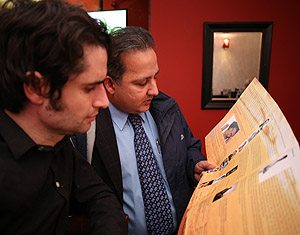 You will need a team of people to run the event, ideally six or more. Break your team into three areas.

Logistics – Who will run the event, book acts, check tech setup, check in guests, liaise with the venue, check wifi (so people can log on to your campaign on phones and laptops). Who is on the floor at the venue to keep things running smoothly? This is the key to a slickly run event. And it should NOT be you!

Promotion – who is promoting? Not just on social media and online, but also getting on the phone and encouraging people to bring others.

VIP liaison – Who are the most important people you need to attend? Actors, journalists, business people? This person should be their liaison and chaperone on the night. Will you also have a VIP area or seating reserved for these people?

Event Delivery – who is going to run the show and hold the microphone? Probably you, so make sure you do not need to get involved in other areas. On the night you should work the room in a presidential manner, shaking hands, thanking people and making them feel special.

Bottom line… You must provide people with something special in return for their contribution. Something above and beyond the project. Lance provided stand-up comedy, and because his film has a strong Greek emphasis, some Greek music as well (both performed free). Whatever you provide try and make it work within the world of your project. 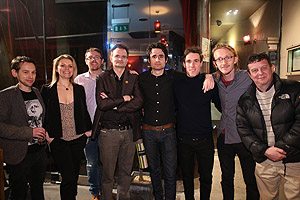 How did the event go and what did you learn?

Lance – Our event was an outstanding success and we learnt that Greek musicians will often play until 1.30am in the morning! If anything, our event was a victim of its own success. There were so many people there and not enough seats – we clearly lost some people due to lack of space. This gave us a good indication of the size of venue to book for our film premiere. I am certain if we booked a venue for 400 seats, we could fill it quite easily (with the same kind of work put in of course).

As predicted, people often couldn’t get to their laptops to contribute, so the donation tin was a very good idea, and in fact two of these would have been even better as I am not sure it got to quite everyone in the room.

We got our likes up on Facebook by over 200 with 48 hours and our Kickstarter campaign had a huge bump overnight. It’s going to be close, but I think we will make it, I am sure of one thing, if we didn’t have this event, we would not have a chance. It enabled us to reach lots of people who would not have heard of the film.

How To Crowd Source Your Movie Poster Design... run a competition!
Amanda Palmer and her TED talk on Crowdfunding, 'The Art of Asking'
Crowdfunding on BBC news
Successful Crowdfunding Old Skool: Raise money for your film by posting letters through pe...
Screenwriter and LSF'er Gabriella Apicella on her project 'Honest Lies'
What game are you playing and who are you competing against?
10 Ways to Make A Micro-Budget Movie