Following a suggestion by local filmmaker Brendan O’Neill of Stickleback Productions (@Stickleback_Pro) Tracey Flynn is now organising  a screening in at The Giant Screen in Birmingham. Tracey, one of the screenwriters from 50 Kisses, has taken it upon herself to get 50 Kisses played on the BIGGEST screen in the midlands… She is also on her own journey of discovery, moving beyond screenwriting, to figure out how distribution and exhibition works. She could REALLY use your help and support. Over to Tracey, read on… 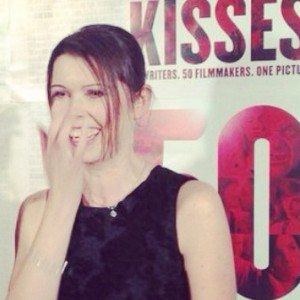 I promise you, World Record Breaking film ’50 Kisses’ is going to be MASSIVE in Birmingham!

Seventy-two foot wide, in fact, at The Giant Screen at Millennium Point on June 7th.
It is the largest screen in the Midlands and I confess to feeling my heart pound a little at the thought of seeing our movie there.

It certainly feels as though 50 Kisses has come a long way. We had a glitzy, fun premiere in the very handsome Genesis Cinema in London and I got a huge kick out of going to BAFTA for a screening to celebrate achieving our Guinness World Record!

Now – *clears throat* – there are 379 seats in Birmingham’s Giant Screen. As I imagine those [currently empty] seats, one after another, row upon row, it suddenly hits me that this is the business end of making a film. As creatives, we may call it the sticky end: the unglamorous bit nobody wants to grab hold of. Yet as writers and filmmakers when we’re sitting at our laptops or behind cameras creating story worlds, we should be thinking of those empty seats and who is going to fill them. They are our audience; like it or not, they are the reason our stories and films are worth something.

So, who, exactly, is our audience for 50 Kisses?

I was excited to meet a group of filmmakers from the Midlands at the BAFTA screening who came along after hearing the buzz on Twitter. They were full of enthusiasm for the film, so much so, they expressed an interest in being involved in the next Create50 project.
Just let that sink in for a moment. ’50 Kisses’ is inspiring other writers, filmmakers and actors to take up the challenge for themselves. That’s exciting to me and I hope it’s exciting to you too! I relish the idea of filling those seats in Birmingham with the energy of eager filmmakers and I will do my utmost to make that happen. (BTW I’m keen to hear from anyone with filmmaker links across the Midlands. Email me 😉

However, that’s just one idea. You may have different ones. Take a moment to consider who YOU would love to see fill those seats and help me bring YOUR audience to this screening.

You can get a ticket below or more information on the site here… http://www.50kissesfilm.com/imax-birmingham/

50 Kisses at The Giant Screen: our biggest outing yet!

How to recut and remix your film… a terrific example
Worst performance at US box office in 10 years... what does this REALLY mean for filmmaker...
50 Kisses on BBC WM Radio with Noreen Kahn
What Can We Learn From SciFi Apocalypse Movie ‘Invasion Planet Earth’? Watch the Comicon M...
50 Kisses… It’s HAPPENING! IT REALLY IS!
Making a transportable DCP and naming conventions for a DCP
Something for the weekend: Roundtable with John Carpenter, John Landis and David Cronenberg